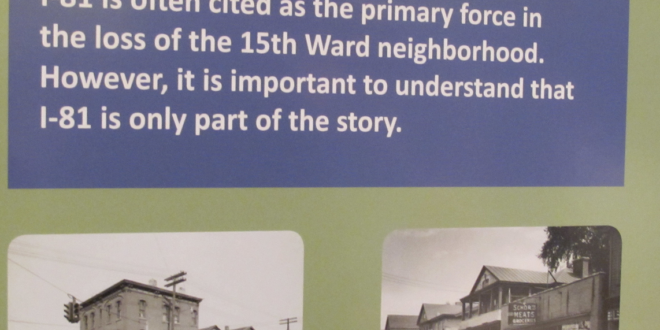 Past, present and future of I-81

A community discussion, “1-81 Racial Isolation, and Economic Exclusion in Onondaga County,” organized by the New York Civil Liberties Union (NYCLU) Nov. 17 brought five panelist together to discuss the past and future of the dividing overpass.

Held at the Community Folk Art Center and moderated by Yusuf Abdul-Qadir from the NYCLU, the evening focused on informing the audience about three points: historical context, present problems and future solutions. Specifically, why and how 1-81 was allowed to be and the systematic problems created by the highway. Secondly, where the economic, educational and financial state of Syracuse is today due to the highway.

The panelists included:
• Robert Haley, an architect and urban planner with CNY AIA/Urban Design Center, who spoke primarily on where the 81 project is today.
• Kevin Jason, staff attorney with NYCLU, who explained 81s impact on Syracuse’s school system and the need for concern about education
• Sally Santangelo, executive director of CNY Fair Housing, who spoke on the housing policy of 81 and the displacement of neighborhoods
• Ocesa Keaton, executive director of Greater Syracuse HOPE, who reflected on the importance of knowing Syracuse’s history of segregation
• Rashida Richardson, legislative counsel with NYCLU, who wrapped up the panelists thoughts to connect all the points made about the impact 81 had, has and will have

The NYCLU’s mission as a nonprofit is to defend civil liberties and rights of New Yorkers. The event’s main objective was to equip the community with needed information about the matter and give citizens an opportunity to voice concern, as well as come up with viable solutions. Panelists also shared what they felt was the best replacement option out of the two the Department of Transportation (DOT) has settled on i.e. via-duct or community grid.

Combined the panelists explained why and how 81 was allowed to be built, thanks to top-down decisions made over decades. To summarize their points: the Federal Highway Act of 1956 declared construction of an interstate highway system. I-81 would be built from this and used to lighten commuter traffic from the suburbs to the city.

It has also been described as “white flight,” meaning when middle class, white city residents moved out of the city and to suburbs. Santangelo explained: “communities were not considered worthy because of federal government policies that led to disinvestment of those communities due to redlining.” When areas that were to be demolished for 81 were previously allowed to de-value into poverty because a majority of non-white population lived there. Redlining is a process, that occurred in 1937, of evaluating neighborhoods by ratings to determine if homes could get loans based on race and ethnicities. The low-income neighborhoods that were to be demolished didn’t have a say about the construction either, Santangelo inputted.

“It’s one thing to demolish a community, and it’s another thing not to give them a place to go,” she said. Residents were given very little to no compensation and were expected to move into wards of equal or greater poverty, she added.

Systematic problems resulted from the initial defunding, and the panelists say 81 made things much worse. Those neighborhoods, made up primarily of blacks and Latinos, saw government funding cut, resulting in poor housing, a poor city-school system, lack of businesses and overall economic damage. 81 helped and continues to support suburban living, meanwhile worsening city-living.

A major systematic problem pointed out by the panel and specifically Jason and moderator Abdul-Qadir was the effect 81 has on the education system. Abdul-Qadir asked Jason why school funding is important, especially considering public school funds are based off of property taxes. City residents don’t pay a high property tax resulting in a financially- and educationally-poor school system. Jason explained that schools are funded at different levels depending on each tax district. Suburban public schools have better facilities and opportunities because they receive better funding from higher property taxes. It is the opposite for city public schools. Jason refers to it as a vicious cycle of less money to fund schools.

“(We should) see 81 as an opportunity to do more for more people to move to the city and to go to city schools,” he said with hope.

In response, Abdul-Qadir closed the panel discussion with saying: “The poor educational system is a large deterrent for people to move back into the city.”

Lastly, two replacement options have been presented by the DOT. One option is to replace 81 with a via-duct much bigger and wider than what 81 is now. The second is a community grid that would spread across downtown, the South and North sides. A third non-viable option that has been submitted to the DOT but not accepted is a tunnel, which is the most expensive and time-consuming.

Haley as well as the other panelists are in favor of the community grid.

“The community grid would return land taken away [from citizens], which means 1.5 billion dollars of taxable money (would go) into the community,” Haley said.

He further shared his believe that the via-duct would keep 1.5 billion dollars from the city. The grid would recharge businesses, he feels, bringing life back to those neighborhoods. “We lost viability of neighborhoods when 81 was built,” he said.

The takeaway from the evening was that Syracuse’s past was determined by government policies and not by the residents directly affected by those policies. But Syracuse’s present and future is in the hands of the community.

Panelists shared that Syracuse’s poverty was allowed and created by discriminatory government policies resulting in systematic problems and lack of economic growth with long-term effects. Despite Syracuse’s history and reality of discrimination and segregation motivated by fear and perpetuated by government policies, the city has the potential to grow and heal. The panelists and moderator emphasized the important opportunity offered by the construction of an 81 alternative. The opportunity is for the community to have a voice to work with DOT and local government to make the best decision possible for the long-term of Syracuse’s cultural, communal and economic health.

The community grid will offer resources, more businesses and bring life back into the deserving city, panelists explained.