The woman holding the microphone jubilantly calls out: “Somebody say praise the Lord!” Dis- satisfied with the crowd’s lukewarm response, she urges them. “Come on, say it like you mean it!” The Rev. Regina Reese-Young is addressing the more than 50 people who have come to welcome her as the new pastor of the Hopps Memorial C.M.E. Church in Syracuse.

They are in the basement of the church, which has been decorated with pink and white flowers and frill.

A long table is set up on one side of the room with the food that will be enjoyed after the reception. Members of Hopps Church are not the only ones in attendance. Joining in: some parishioners and pastors of nearby churches, as well as representatives from throughout the community, including the mayor and State Sen. David Valesky’s office, the City Common Council, Interfaith Works and the Syracuse city schools.

Reese-Young was just named by Sr. Bishop Thomas L. Hoyt, Jr. to be the new pastor of Hopps Memorial C.M.E. Church in Syracuse, beginning this month. The church on the South Side of the city is 84 years old this year. She is the first female to reside as pastor of the church. She follows the Rev. Kevin J. Agee, who made a name for himself in the congregation doing community activism, especially in dealing with the poor and children. Friends for years, she describes him as a gentle, but firm pastor filled with a depth of knowledge.

Reese-Young shares many of the same qualities and passions as her predecessor. Reaching out to the youth is of particular importance to her. Known for her exciting and magnetic personality, she loves incorporating a lot of music, dance and social interactions into her “reverending” style. 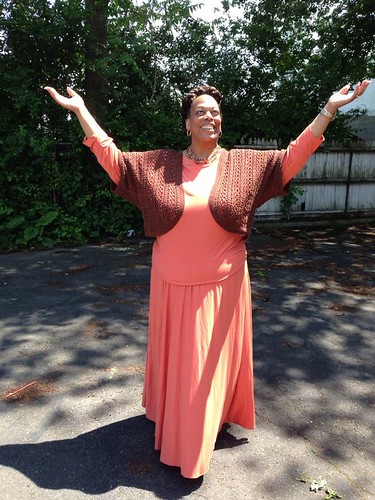 Regina Reese-Young grew up in Los Angeles. After she graduated from Crenshaw High School in 1973,
her parents were unable to send her to college so she opted for junior college, taking a few classes, but didn’t finish with a degree. In 1986 Bishop E. Lynn Brown, saw something in her and challenged her to return to college full time.

She was seven months pregnant and without the means to meet that challenge.

It would be another two years, she said, until she “took a leap of faith, packed up my 2-year-old and everything I could stuff into my Toyota Corolla and headed to Jackson, Tenn.”

of Theology at the Interdenominational Theological Center in Atlanta, with a master’s in pastoral care and counseling and post-grad work in clinical pastoral education.

GROWING UP IN A LARGE FAMILY

Her personality is strong and immediately noticeable from the brief speech she gives. She is vibrant and full of energy, authoritative but not abrasive, confident but not arrogant, compassionate yet forceful.

Born the second oldest of seven to William and Geneva Reese, she quickly became the big sister who was required to grow up, perhaps just a little too fast. Dad worked long hours to provide for his family while mom always had her hands full running a household of seven children and all that entails.

Her older brother was what she described as “a classic disappearing act,” leaving her to shoulder much of the responsibilities. When one of her younger siblings didn’t return to the gathering point when it was time to go home, she was the one who would venture into the neighborhood in search.

The lost sheep of the family, her older brother, ended up in and out of prison throughout his adult life. The only contact they have is when he shows up at their parents’ house from time to time.

Maybe that’s why the plight of the young black man is another area she holds as special in her heart. She
has had great success on the many different stops her ministry has taken her, but she remembers one man who has had a lasting impact on her.

He was a young man, late 20s early 30s. She describes him as a “rough-neck street fella.” He was a drug addict, but came to her to get clean and get on the right track. She decided sitting down and trying to get touchy-feely with him wasn’t going to work. Instead she decided to give him a job to do.

She named him her personal security man, even giving him a hat and shirt to wear with “security” in big, bold letters. He was in charge of checking on her car throughout the day since she had to park in a rough neighborhood and he would get to church early on Sundays to make sure no one took her favorite parking spot. But as is the case with the Methodist religion, she was eventually moved from that church. The new pastor didn’t understand the need for the young man’s services and eliminated his position.

The man soon returned to the streets and within two months of her leaving, he was killed.

That caused her to rethink how she approached ministry. She dedicated herself to focusing on making sure the people she serves are connected to the Lord, the church and one another instead of just her.

“I think about that man a lot,” she said. “He needed a support system and when I left, he didn’t have one anymore. I spend a lot of time now making sure people are connected to people.”

Since then she has started a sort of program for people who are new to the church. She pairs them with regular members and holds them each responsible for one another, making it to services, community activities and general friendship.

The Rev. Ruthie McKittrick has known Reese-Young for about 10 years, meeting through their shared profession, and became friends almost immediately. She serves as the pastor for Wilson Chapel C.M.E. in Coweta, Okla. Her congregation is always excited when Reese-Young visits in what has become an annual tradition for the past six years.

Three years ago on her visit she was preaching at what they call their Praise and Worship Revival. All pastors use analogies to convey messages, but Reese- Young decided to do something a little different. Instead of praise and worship she told the crowd to bob and weave.

She used the “Rocky” theme song, “Eye of the Tiger,” and paralleled that with how a boxer dances in a fight. Keep moving, don’t let the enemy hit you.

“The message was, when you have a situation or challenge in our lives you go back to our praise and worship, back to our bob and weave,” McKittrick said. “We were literally shadow boxing in church. I don’t think anyone else could have done the same thing and made it work.”

Even McKittrick’s 88-year-old mother and all the other elderly members with canes and walkers pushed everything to the side and started moving as much as they could.

It’s something they still do occasionally and to this day when she tells people Reese-Young is coming to town people will automatically yell out “Bob and weave!”

Making a lasting impression seems to be something that’s followed Reese-Young since she was young. Her brother Kurtis, the baby of the family, can remember vividly his sister always being there to help take care of him and his siblings when mom and dad were busy.

“She would tuck me in, read me bedtime stories,” he said. “She was my first buddy, but she was also a second parent in some ways.”

Reverend, mother, perpetual big sister. From growing up reading bedtime stories to her baby brother Kurtis, to helping adopted children who just needed a friend and a safe haven, Rev. Regina Reese-Young now comes to Syracuse to do what she has always done. Parent, sister, friend, reverend. Whatever the situation calls for, she brings the experience and capabilities to help relieve some of the ails from which every city suffers.

“I don’t pretend to have the same size feet as Pastor Agee,” she said. “But these size 11’s go pretty good.”

— Article and photo by Donato DiRenzo, a graduate student at S.I. Newhouse School of Public Communications