As a little girl growing up in Louisiana, Carolyn Barrett spent a lot of time waiting around the pharmacy with her mother.

“I’d ask when we were going to be done, and she’d say, when they were done,” Barrett said.

Barrett, who was 10 at the time, asked her mother to lift her up over the counter so she could see what was taking the pharmacists so long. Then it was clear — each customer’s pills had to be counted out by hand to make sure that the dosage was correct.

“I’m going to come up with a way for them to count pills faster,” she recalls telling her mother that day. 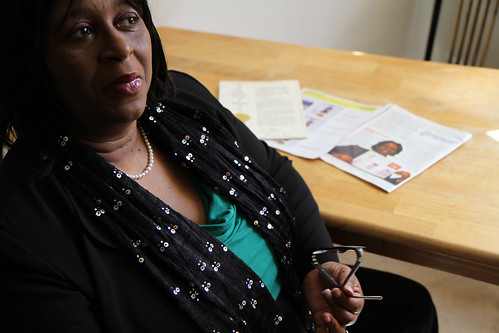 Now, more than four decades later, that’s exactly what Barrett is close to doing. Though it took a lot of work, Barrett was awarded a patent in 2002 for a pill counting machine. It’s now being made into a model by George Mason University, outside Washington, D.C.

“She was looking for help with her invention and I’d started an inventors club, and through the club offered to help her in any way we could,” said Barnabus Morgan, founder and former president of the university’s Inventor’s Club.

Barrett didn’t actually start working to make the idea from her childhood a reality until she was in her 30s. She pursued the patent process, and received the patent for the pill counter in 2002.

The process was frustrating. Barrett worked through a corporation that was supposed to help aspiring inventors. After wasting money and seeing no results, she realized she would have to go about it herself, she said. Representatives from George Mason University contacted Barrett soon after, she said. The school wanted to turn her patent into a working device to sell.

Barrett is now closer than ever to seeing her pill counter become a real product on the market. But even when George Mason University is done with the model, there will still be work to do.

“I’m looking for venture capital to come forward and invest so that I can see it on the market,” she said.

Barrett’s mother and grandmother have been gone for years now, but the promise she made to them still holds.

“I promised my mom and grandma that I was going to invent a pill counting machine when I grew up,” Barrett said.

“I wanted to pursue it while they were living, but I couldn’t.”