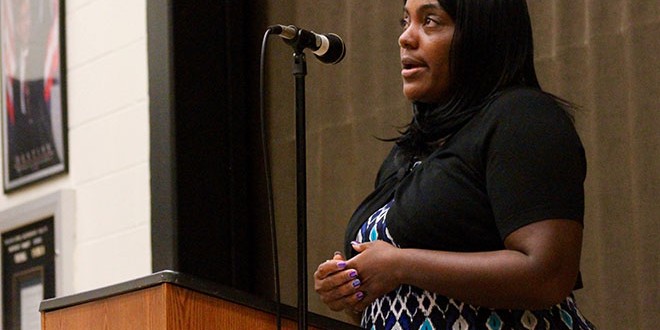 Personal Stories Told during The Life of a Felon Workshop

Sharon Washington founded Felons On The Move because she said it fulfilled a need in the Syracuse community. The organization helps felons navigate structural barriers in housing, employment and public benefit restrictions after their release and also provides career services, training, and business and legal guidance.

“It’s more than just trying to get them a job,” Washington, the executive director, said. “It takes love, patience, understanding.” 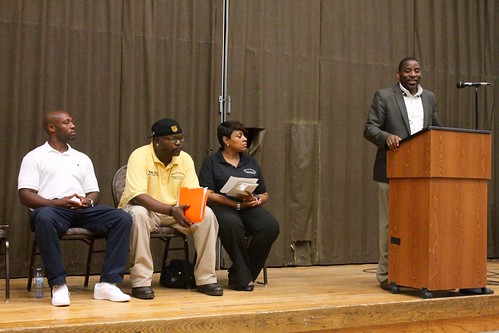 Samuel Rowser recounted his story and how he recovered from a criminal past and drug addiction while Davon Hunter, Will Elliott and Sharon Washington listen.

Felons On The Move held “The Life of a Felon” workshop Aug. 31 at Southwest Community Center to spread the word about the organization and its services to community members. The event featured multiple speakers, including former prisoners.

LeVoya Dixon, 36, recited her testimony about the services Felons On The Move provided to her. Dixon turned to the program when she was fired from her job for having a criminal background. She spoke about her troubles committing to the program at first, but once she did, she was able to make a change in her life.

Dixon recounted for a crowd of about 20 how Washington attended her court dates and negotiated with her lawyer. “Not only is this program there for your felony, there’s love too,” Dixon said.

Willie Elliott, the assistant director, said that Felons On The Move is different from other organizations that have similar missions because it aims not only to help felons become reestablished, but to also keep them involved in the community.

“We’re not just focused on reentry, not just finding a job, but becoming civically engaged,” Elliott said. Washington founded the organization in 2013 and it currently has about 60 clients enrolled. 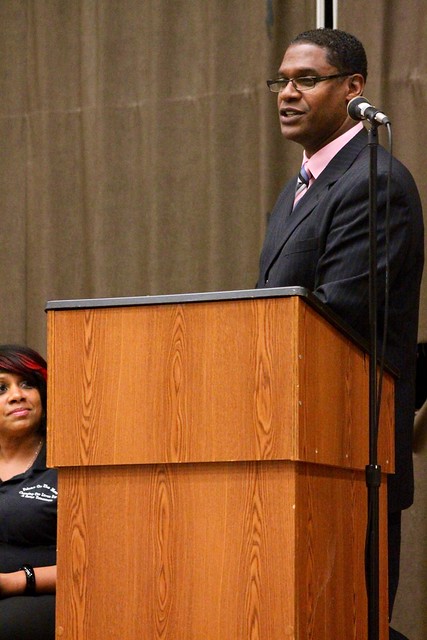 At the start of the event, past convicts in the audience stood up to recite the mission statement of Felons On The Move, which emphasizes moving on from the past and obtaining second chances.

One speaker, Davon Hunter, served eight years of a 10-year sentence for a weapons charge and talked about his experiences attending college while in prison in order to change his life once released.

“It feels good to know that you don’t have a jail ID, I have a business card with my name on it,” Hunter said. Hunter also said he plans to take 50 adolescent boys to the 20th anniversary Million Man March in Washington, D.C. this October.

Another speaker, Samuel Rowser, recounted his story and how he has recovered from a criminal past and drug addiction. Rowser advocated the importance of getting an education and going to college, which he also did in prison.

The keynote speaker, Mark Muhammad, touched on a variety of topics including his personal life, history, racism and the Bible and religion. Muhammad even encouraged audience members to disregard the term felon.

“You are not a felon, you are, in fact, a god,” he said. In contrast, Washington said often one of the first steps in reaching out and helping convicted felons move on is to accept the term. She also said a difficulty is getting women to come forward and ask for help.

Attendants received a certificate of completion for showing up and also took pamphlets and handouts about support organizations and resources aimed to help people re-enter society.

Kenyah Smart, 34, attended the event because he knows Washington and he is interested in what the program can do for him. While it was his first time at such an event, Smart appreciated being surrounded by others with similar goals. Smart even brought his 7-year-old son.

“If you’re around good people, you’ll do good stuff,” he said about having his son attend.

In closing, Washington informed the crowd that Felons On The Move is looking for board members, community partners and individuals to help apply for tax exempt status. There will be similar events in the future as well as job fairs and life skills workshops.

Individuals interested in the organization’s services can stop by the office at 1640 South Ave. or call (315) 471-4676 or email Felonsonthemove@hotmail.com.

— Photos and article by Ashley McBride, staff reporter for The Stand 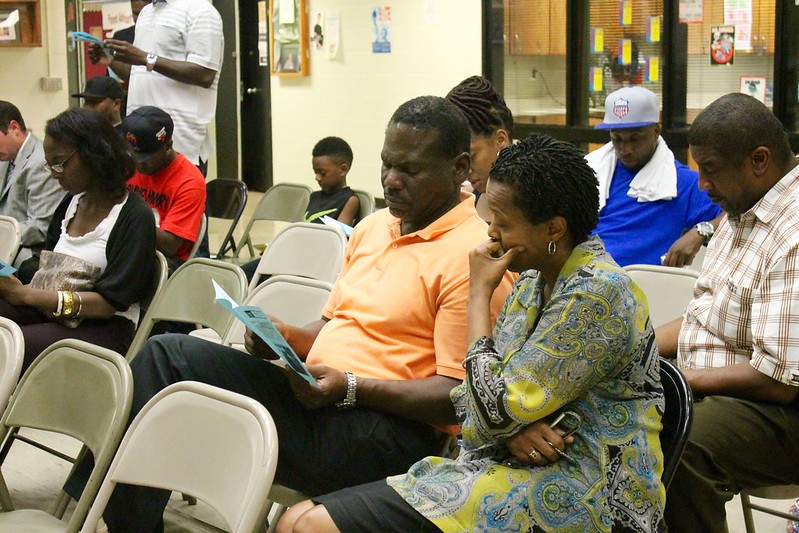 Attendees of the Felons On The Move “The Life of a Felon” workshop review handouts during the session held at the Southwest Community Center.