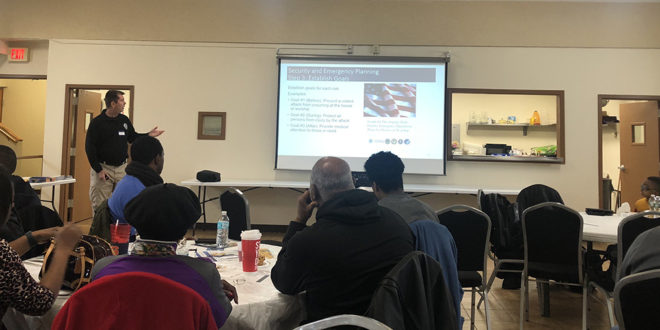 At the end of 2019, a man walked into a Texas church in the middle of Sunday worship and began firing a weapon, killing two and wounding three. Two years before that, at the First Baptist Church in Sutherland Springs, Texas, another gunman shot and fatally wounded 26, further wounding another 20. These are just two church shootings that took place in the United States over the past two years.

With this in mind, the Tucker Missionary Baptist Church hosted a Church Safety and Security Summit for houses of worship last month. The summit was held in association with the New York State Police Counter Terrorism Intelligence Unit. Representatives from the Syracuse police and fire departments were also present.

According to presenter Pete Owen, a protective security advisor, there are three options for an individual to take during an active shooting: to run, to hide or to fight. He advised worshipers who run, to take action to protect lives, leave belongings behind and keep their hands up when exiting the building so law enforcement officials will know they are not a threat.

It is important, he said, to ensure that worshipers were trained in basic techniques to keep themselves safe, such as how to hide and basic first aid like CPR because of current attacks on places of faith across the nation in recent years. He added, safety workshops need to be conducted as often as fire drills and suggested that members of the congregation take the New York State’s Safety Course which is available for free online. His presentation was followed by a talk by the fire department and the Department of Homeland Security.

“You can’t say where it will happen. No place is more vulnerable than the other. The best thing to do is to be prepared,” said Lt. Brian Novitsky of the Syracuse Police Department.

The event was the brainchild of Kyle Tape, a deacon at Tucker Missionary Baptist Church and director of the Commission on Security. Tape began his career in security as a bouncer at a club. He started getting involved in church security after he was asked to help manage a youth event at his church.

“Church exists to fulfill a need. We can’t turn people away from the House of God. But unfortunately, with the way the world has been, we have to be careful and we have to watch out,” he said. “This is a sort of insurance. The shootings in Texas and other parts of the world told me that we also needed to keep ourselves safe.”