At the second of three Consensus CNY meetings in Syracuse, residents shared their apprehension towards consolidating the city and county government.

Although Consensus member Melanie Littlejohn reiterated the goals of better government, economic development and representation and inclusion, people gathered at the Southwest Community Center Monday, Feb. 8, expressed disillusions with the initiative and fear that they would be left out.

In January, the Commission for Local Government Modernization, or Consensus, released preliminary recommendations that cited poverty concentration, low wages, budget deficits and a decline in jobs as impetus for systemic change. The report opens with, “We can do better.” 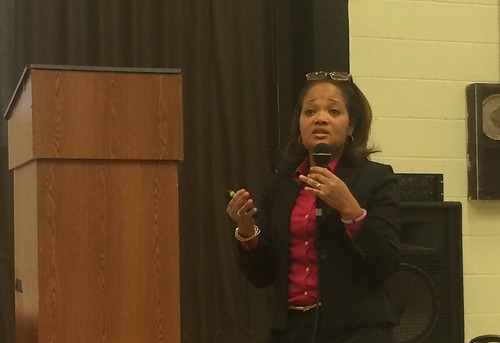 Melanie Littlejohn, the director of community and customer management for National Grid, and a member of the Consensus commission, conducted the meeting on Feb. 8 at Southwest Community Center.

Through consolidation between Onondaga County and its 35 municipalities, the Consensus hopes to centralize delivery of services and focuses on six areas: infrastructure, public safety, municipal operations, economic development, governance and public engagement.

Monday’s meeting highlighted municipal operations and economic development and how consolidation would benefit municipalities and taxpayers. For example, the report states that each town in the Syracuse-Onondaga community operates its own locally-funded court system via taxpayers. Many of those courts run a deficit each year. Recommendations to the court system include shared services to lower the amount of separate court systems, combining village and town courts and considering a regional court system.

Throughout the meeting, Littlejohn emphasized the importance of the public’s participation and feedback.

“I’ve had to say this over and over, and Sharon [Owens] has said this over and over: The die has not been cast,” she said. “This is about you weighing in and you and us deciding how we want to move forward as a community.”

Some residents are against the proposal because they fear it will drown out their voices and affect political representation. City resident Alfonso Davis even compared the potential consolidation to the 15th Ward, a robust black neighborhood in Syracuse razed to construct I-81 in the 1960s.

“It’s like re-gentrification in high fashion,” he said. “That’s what I would call it. And the people in the city will suffer.”

Once the commenting period closes, the Consensus commission will convene to create a final recommendations report to be released to the public. The proposal could go to referendum in November for residents to vote on it.

Councilor Khalid Bey, who represents Syracuse’s 4th district, said he felt that the window to hear comments from the public is too short. While Consensus took two years to do research and compile the report released on Jan. 26, comments are only being accepted until March 16.

Littlejohn, who heads the public engagement committee of the commission, said during that period, the committee talked to more than 2,000 people across the county. “Even though it feels like it might be short, we’ve been engaging in one way or another for the past year and a half,” she said. “Even after we get to the end of this component, you will have the ability to weigh in.”

People can submit comments at the public meetings, through consensuscomment.com, facebook.com/consensusCNY, emailed to info@consensuscny.com or mailed to Consensus, c/o Syracuse 20/20 at 120 Madison St., 15th Floor in Syracuse.

The next meeting at Southwest Community Center is set for 6 p.m. Feb. 29 and will focus completely on governance.