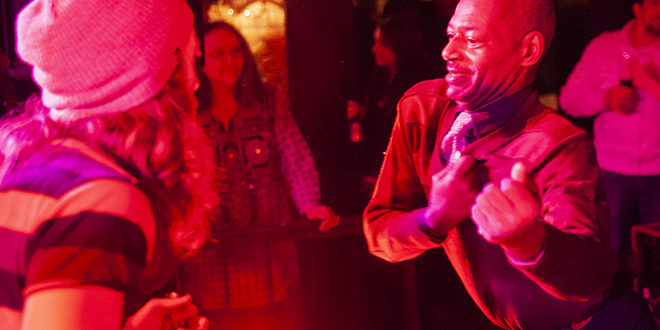 Elijah “Eli” Harris dances during a Joe Driscoll show on New Years in 2014 at the King of Clubs in Armory Square. | Ben Cleeton

Yesterday was April 7, it was the fifth anniversary of the death of my good friend and musical brother, Jeff Houston. I had been thinking for a couple of days about Jeff and some of our adventures, both musical and non-musical, and about the things we would laugh about.

All brought a smile to my face.

Jeff’s brother Michael Houston, I imagine, was doing the same because he had posted a tribute to Jeff and their cousin Norman on his Facebook page that day. Seeing it made me go digging through my picture files to see if I could come up with something fitting to compliment Mike’s tribute, and to pay my respects to Jeff’s memory.  I came across some pictures from JAMS’ first Musicians’ Cookout in 2014. Jeff and I had been part of the committee that put the event together. I remember Jeff being very happy on that day — happy because of the event’s success. It also brought to my memory a warm story that he’d told me about another musical brother of ours, Elijah “Eli” Harris, or Lijah as we called him.

Lijah was a busker.

For those of you who are not familiar with the term, a busker is a person who entertains on the street or in other public places for monetary donations. Lijah had been singing and playing guitar on the streets for decades, however he’d not always done that. He and I go all the way back to the ’70s. I remember when he used to be in the band called the “Blackberry Bunch.”

Donna Alford of the “Donna Alford JaSSBand” remembers Lijah had a generous spirit. “He was in one of the first bands that I sang in as a teenager,” she said. “One time, him and his wife Mary, (now deceased) had both just gotten paid, and he peeled off a few dollars and said, ‘Here, this is for you.'”

In recent years when her band would play downtown at Al’s Wine & Whiskey Lounge, Lijah would pop his head in the door and give “the look.” The look meant that he wanted to sit in for a song or two — or three sometimes. We would almost always oblige him, depending upon the time, the pulse of the room and the momentum of our set.

His song with the band was “On Broadway.” He would entertain the crowd sometimes with that song for nearly 15 minutes. Audiences loved it because he was very entertaining, and they knew who he was from seeing him on the streets. Lijah knew how to capitalize on it too, because the band would usually take a break after that. He’d next go outside and keep the party going for those who would be gathered out for a smoke or just passing by. And his tips would roll in.

When Lijah heard there was going to be a Musician’s Cookout, he gave me a call. “Reg, I heard about the cookout. I gotta be there man. Save me a ticket. When I hustle up some cash, I’m going to get it.”

I replied, “don’t worry about the cash, man. Just stop by to see me, and I’ll give you a couple.”  Sure, enough he came by, and I was true to my word and didn’t think much more about it.

Clark Reservation presented a challenge for Lijah to be there. You see Lijah rode his bike almost everywhere he went, and Clark Reservation is 3.7 miles straight up Brighton Avenue’s hill. That’s why I gave him two tickets so he could offer one to the person who would give him a ride.

The day of the cookout came, July 19, and it was very warm and sunny.  All the committee members had agreed to meet at Clark Reservation early in the morning to get things set up before the event started at noon. So, Jeff set out early on his way driving down Salina Street then turning up Brighton Avenue. Part way up the hill, Jeff said he saw this guitar, “it looked like it was floating.” As he got closer, he saw that it was strapped on to somebody’s back as they were pedaling uphill. He realized it was Elijah, so he pulled over. “Yo man, where you going?” Elijah was a little bit winded, but he said, “I’m headed up to the musicians’ cookout,” Jeff said, “Man lock that bike up to that pole over there and get in this car. I’m going up there now.”

Jeff and I chuckled when he told me the story. But we were not really laughing at Lijah, we were laughing at the lengths that musicians will go to be with other musicians for a jam session. You see Jeff and I could relate because of the things we’d done in our own lives to make it to the jam.

Unfortunately, five years to the date of Jeff Houston’s demise, Elijah Harris met his. He was hit by two cars. The first car hit him as he was pedaling his bicycle. The second as he was waiting on help to arrive. Both cars drove away. It was not far away from the very spot where Jeff had picked him up. I don’t know for sure, but I’d like to believe that his beloved guitar was strapped to his back and that he was either on his way to a jam or just leaving one.

As I was writing this story, guitarist and friend, Johnny Booker called me from Atlanta. He heard the news about Lijah. He and Lijah came up together and had stayed in touch after Johnny moved.

He shared Elijah had just called him on Monday and told him about a vision he’d had in a dream recently. Lijah dreamt that he had a check for Johnny and that he was on his way to bring it to him but something bad happened along the way, and he never made it. I could tell from our conversation that Johnny was clearly shaken, especially given the reality of the news.

So, I tried to lighten the mood. I told him the story about Jeff picking Lijah up for the cookout. Johnny immediately started laughing. He said, “Lijah told me that story.  He had just recovered from a previous bicycle/car accident when that happened.”

“What’s funny,” Johnny continued, “is that Elijah, Jeff, Victor Smiley and my cousin, Rickey Pulley and (myself) all grew up together playing our guitars. We would walk everywhere with them strapped to our backs to go jam. Elijah definitely kept that going.”

The life of a busker is not an easy one. For it to work, you must always be where the action is. Sometimes that could mean being out in the cold and rain, working all day and night for just a few dollars. You must be persistent and resilient too. That means getting up and doing it again and again after having been slapped in the face, (sometimes literally), by those who don’t understand that you are just trying use the skills you were blessed with to make a living. Some don’t respect the fact that your life has meaning too.

That type of resilience builds a person’s character. Lijah had that. In his life, he had been widowered, hit by cars, beat up, robbed of his money and his guitar and looked down upon by many. But it never stopped him from sharing his love with all of us. He kept doing what he was blessed to do. It was his in his character. He had a giving spirit and a beautiful soul.

The day before Elijah died, a popular photographer and social media friend, Sandy Roe, posted a photo of a classic old weathered automobile abandoned in a field. She captioned it, “Tattered and worn but still enduring and beautiful.”

That was Elijah: He kept on right to the end bringing love to the world. He has been called home and in such a tragic way. But he will be remembered, because although sharing his gift had made him tattered and worn, he was still enduring and beautiful.

Reggie Seigler is a South Side resident and regularly writes the “A Friendly Five” music column. If you have A Friendly Five suggestion? Contact Reggie
at reggie@softspokenband.com or (315) 479-9620