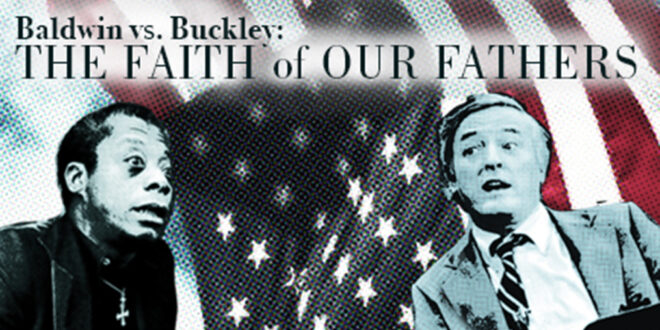 Review: ‘Baldwin vs. Buckley: The Faith of Our Fathers’

An intellectual showdown. A battle of two singular minds. The 1965 debate between conservative heavyweight William F. Buckley and progressive civil rights leader James Baldwin stirred the passions of its audience and remains shockingly relevant to this day.

This war of words held at the height of the civil rights movement was hosted by England’s Cambridge Union and broadcast by the BBC. It hinged on the premise, “The American Dream has been achieved at the expense of the American Negro,” with Baldwin arguing in favor and Buckley dissenting. Baldwin won the debate, earning a standing ovation from the audience.

Kyle Bass, Syracuse Stage’s resident playwright, transcribed and reimagined the debate as a staged production. Titled “Baldwin vs. Buckley: The Faith of Our Fathers,” it was Syracuse Stage’s return to live theater after 18 months of delayed performances and a virtual season. The production is also part of Syracuse University’s Artist in Residency Program, with Friday afternoon’s performance reserved for freshman students.

Syracuse Stage director of marketing and communications Joe Whelan described the production as a timely choice, serving also as a form of community outreach.

“We’re interested in doing some material that will speak to the political climate, speak to the social situation in Syracuse and in the country today,” he said.

Director Godfrey L. Simmons Jr. said that he felt giddy about the return to live theater after so many months away. He, too, emphasized the timeliness of the production, drawing a direct connection between the debate and our current political landscape.

Bass first put together this production in 2016. Every word was transcribed precisely as it was originally spoken. The production was stripped down, with a few chairs and podiums serving as a set, but it was nonetheless powerful. The actors arrived in Syracuse and began rehearsals a mere two days before the show’s opening, yet the performances felt fully realized. The fact the actors read their lines off pages held in front of them did not take away from the theatricality—the language was like great theater in and of itself.

The play began with individual speeches from Buckley, played by Wynn Harmon, and Baldwin, played by L. Peter Callender. Buckley, brimming with barely contained moral outrage, condemned a Black youth who called Johann Sebastian Bach “that old dead punk.” Baldwin spoke with the passion of a preacher on the oppression he faced as a Black man in America. Although these speeches were not part of the debate, they, too, were words spoken verbatim by each man. Bass said at a previously held talkback with an audience, he chose these speeches to introduce each man’s point of view.

Callender’s portrayal of Baldwin was full of passion and gravitas, while Harmon’s Buckley was tightly controlled, snooty, at times literally looking down his nose at Baldwin. Callender evoked Baldwin’s personal connection to the subject matter through a gently rising and falling tide of emotion. He simmered with a quiet rage and a world-weary sadness as he said that he himself was a slave, a soldier, a sharecropper—the trauma of his ancestors lived in his body.

Meanwhile, Harmon brought Buckley to life with his stiff, pompous posture and gestures. Buckley imperiously suggested that Black Americans were to blame for their own situation and quoted Booker T. Washington while arguing for increased voter suppression, talking points that are all too familiar today. Both men possessed fierce intelligence, but Baldwin couldn’t help but speak more magnetically.

As Harmon put it during the talkback, “Baldwin is speaking from his soul.”

Behind the actors, a large screen flashed both historical and modern images—black-and-white photos of idealized white suburbia and Norman Rockwell illustrations contrasted with pictures of Black children in cotton fields, Black laborers standing stoically along railroad tracks. Black Lives Matter protests. Torch-carrying neo-Nazis in Charlottesville. A portrait of President Obama. An American flag with President Trump’s face superimposed over it. This rich element of the production made the connections between the America of 1965 and the America of today bone-chillingly clear.