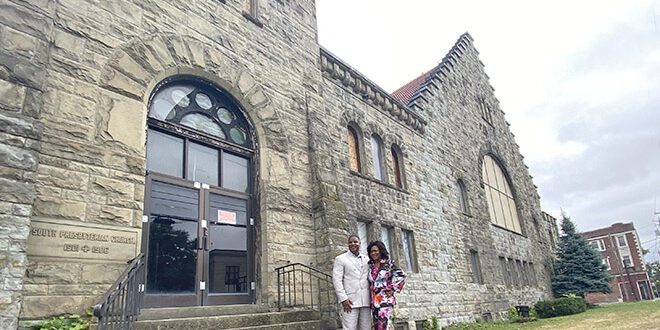 Work is moving forward by Evelyn and Chino Ingram to redevelop the South Presbyterian Church. | Ashley Kang, The Stand Director

Sold on the South Side

The Greater Syracuse Land Bank announced in July the sale of the long-vacant South Presbyterian Church to local couple Evelyn and Chino Ingram who plan to redevelop it into a community venue space.

The property, at 2110 S. Salina St., has sat vacant for more than a decade and was obtained by the Land Bank in 2015. The Ingrams plan to turn the 16,000 square-foot, castle-like stone building into a multi-use facility, focused primarily on events. Additionally, they plan to create an afterhours lounge for community members to gather after work, socialize and network. “We’ll even offer conference rooms for community groups to rent for their meetings,” Evelyn said. “The building will have activity day and night.”

The couple has named their space “The Castle” and say when people come, they want their guests to feel special and even regal. “You are king and queen when here,” she added.

Chino grew up two doors down from the church, using its parking lot and sometimes roof as his personal playground. “There was no swing set or anything then,” he joked. “Just me and concrete.”

He says he’s excited to return and be able to revitalize this corner. “It’s time for this community to go back to what it once was,” he said. “We want to be part of the South Side’s rebirth.”

Earlier this summer, the Land Bank sold another long-vacant building located three blocks from the church. The former apartment building at 2520 S. Salina St. was purchased by Todd and Dr. Shanelle Reid. They plan to convert the building and small house on the lot next door into the first Black-owned, full-service dental laboratory in the United States. Additionally the four-story structure will include a day care, office space and a small gym.

“To have two projects like this happening on the South Side, and both being managed by African-American couples from the community is so exciting to see,” said Katelyn Wright, executive director of The Greater Syracuse Land Bank.

The L-shaped church consists of the original chapel built in 1902 and a larger sanctuary built in 1907. The church is a local landmark and listed on the National Register of Historic Places. Its historic standing qualifies it for both state and federal historic preservation tax credits.

The Ingrams will seek such eligible tax credits, grants and investors while also utilizing their own financing to complete. “We stand on our faith,” Evelyn said, “and we know that it will happen.”

In finding the right owner, Wright says the Land Bank was looking for investors who were open to include the community in their planning process and ensure the building remains open to the public. After receiving two offers, the Land Bank’s board voted to move forward with the Ingram’s plan during its July 21 meeting.

The Ingrams want to keep the community in the process and planning as they move forward. Both say progress will be shared publicly along the way. While still in the early stages, the projected timeline is to secure the necessary permits and financing to next start construction in 2021, with a goal of completion by 2022. The Reids’ dental lab up the street has an official opening date set for March 2021.

“The city is on an up swing,” Chino believes. “We want to swing along right with it.”

View a Collection of Church Photos

Ashley Kang serves as the Director of The Stand Newspaper