It’s Election Day in Syracuse. While this year’s election may not be as glamorous as last year’s Presidential Election, it’s still important. Across the city voters will decide on a new mayor and several common council seats, among other issues.

At three South Side polling locations, Beauchamp Branch Library, Engine House No. 8 and Danforth Magnet Middle School, turn out was slow. Each location had seen less than 100 voters turn up before lunch time.

“This is a normal turn out for this type of election,” said Margaret Tyson, working the polls at Danforth Magnet Middle School. “When it was for president, we couldn’t even keep up.”

None of the poll workers seemed too worried. They all expected turn out to pick up as people left work later in the day. 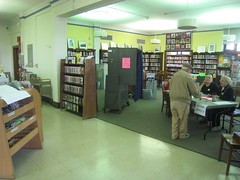 “Usually it picks up around 4 p.m.,” said Jennifer Biribwamugumu, who was spending her day working at Engine House No. 8.

Though public enthusiasm may be lower this year, the spirits of the poll workers were still high. At each location, the workers jovially chatted the day away and were quick to help anyone who walked through the doors.

For Margaret “Magpie” Campbell, who was working at Engine House No. 8, it was exciting enough being able to help out for the first time.

“I’ve never done it before, so I figured why not. I’ll do my civic duty,” she said.

Her sentiment was one that was echoed by many of the other poll workers, most of who had worked elections in the past. Helping with the elections was their way to participate in helping shape Syracuse’s future.

“I believe in this whole process and am happy to be a part of it,” said Ruth Mavis, a poll worker at Beauchamp Branch Library.