Lanika Mabrey volunteers her time to improve her community

For Lanika Mabrey, sitting down to talk about all of her achievements is not easy.

“I must admit, talking about myself isn’t something I’m particularly used to,” she said. “But I think that this is a good way to give voice to some great things happening in our community.”

On any given day, Mabrey is running from one place to the next, devoting much of her time to the organizations
that matter most to her and reaching out to the community she has always called home. But her life hasn’t always been about community-driven work.

Nearly two years ago, she lost her mother, Salendria. 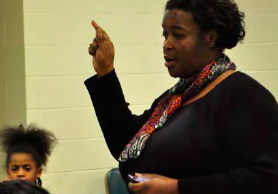 Shortly after, she was laid off from her job as a program coordinator.

“For the last few years I have been dealing with severe losses, death, divorce and the loss of my job, and I had a very hard time with it,” she said. “But I basically decided one day that I wanted to stop focusing on what I lost, and start focusing on what I still have.”

Her new outlook offered different ways to memorialize her mother, and a newfound love of community involvement.

At the suggestion of a friend, Mabrey decided to donate all of her birthday gifts to a local charity in her mother’s name. That inspired Mabrey to get involved with local organizations, where she spends two to four hours a day, including weekends.

Mabrey volunteers at two organizations where her mother also devoted much of her time: Syracuse United Neighbors, an organization aimed at improving neighborhoods on the South Side; and the Partnership for Onondaga Creek, which works to educate the community and fight environmental injustice.

“To really educate people and to get them involved in the community is what I love to be a part of, and these things are way more exciting than I am,” she said.

But the biggest undertaking for Mabrey, and one she is most proud of, is the recent creation of Linda’s Lights, a foundation in honor of her mother.

The name is based on the spiritual principle of letting your light shine, Mabrey said. It also represents four areas that her mother devoted her life to: education, youth, health and community.

“It was great to watch my mother work from the sidelines because it was an opportunity for her to get involved and make a difference,” Mabrey said. “Initially, I started following in her footsteps to focus on the things that reminded me of her, and then I realized they are really important issues, and they mean a lot to me, too.” Linda’s Lights is in the early stages of development, but Mabrey is hopeful that by the end of the year, the foundation will be incorporated.

“I want to be a positive representation of my community,” she said. “I have the best of both worlds because I have grown up in this neighborhood, and I can relate to the residents and their concerns.”

Mabrey says she also gives back to the community through her church, Open Arms International Ministries, where she is a youth leader. “My faith is my strength,” she said.

While Mabrey waits for employment again, the proud aunt, sister and friend is content with earning a much different kind of pay.

“We can’t avoid those moments when your life will be turned upside down or when you have to find a new normal, but I believe everything happens for a reason,” she said. “Even though I’ve lost a lot, I have found a new love and have gained some wonderful people in my life.”

Find out how to give time.