Minister practices his faith by combining singing and preaching

On Sunday mornings while many families were packing into the family station wagon to head off to a church down the road, Kevin and his 10 siblings were congregating in their living room for Sunday morning worship with their parents. His father, Bishop Jonathan Stephens Sr., was a preacher. His mother, Arnell Stephens, was a pastor.

Kevin played drums for the worship services, while his brothers Jonathan and Leonard played the guitar and steel guitar, respectively.

Their church belonged to the House of God denomination. 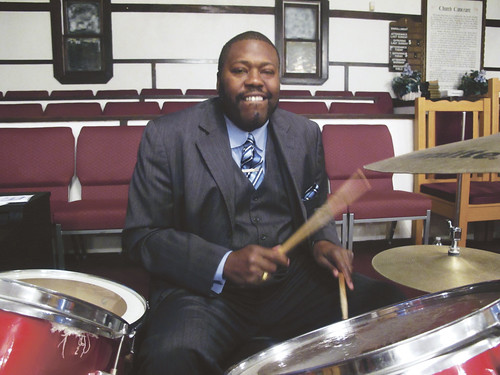 “The House of God is a Pentecostal Church,” Kevin said. “It’s similar (in doctrine) to the Church of God in Christ. One difference though, is that the House of God allows women in the pulpit,” evidenced by his mother’s role as pastor of their church.

Even though the church was small, there sometimes would be as many as 10 other people attending church at his home on Sundays. “Most of them were extended family members and friends,” Kevin said.

Playing in church was Kevin’s first exposure to music. But around 1980, he started thinking about it a little more seriously, and he started a group. Passing off the drumming responsibility to someone else, he grasped the role of lead singer and frontman. The group was called Free Spirit. Free Spirit was a name he liked because he felt that it embraced the whole idea of giving freely of oneself according to God’s will.

As the frontman, Kevin embodies that free spirit. He doesn’t set any boundaries for himself. He sings, dances, shouts and gives testimonies and praises to the Lord. Sometimes he seems almost entranced.

The Rev. Fred Hintz is pastor of the Greater Love In Christ Church at 2026 Midland Ave., and has been a member of the Free Spirit ensemble for more than 10 years. “Kevin has made a lot of sacrifices of himself to bring his gift of ministry through music and performance to the people,” Hintz said. “He’s spent a lot of his money and his time. He has a personal commitment to sharing the Word of God.”

Kevin describes his purpose. “I want to minister to the people with my music. I want people to be saved. I want them to know that what I have for me they can have, too. I always ask God to use me to help lead His people to the door of salvation.”

These desires to help save others led him to answer his calling in the year 2000. That’s when Kevin became a minister, as his parents and many of his siblings had done before him. He then changed the name of his group to Minister Stephens and Free Spirit.

Kevin is now an associate minister at Christ Missionary Baptist Church at 319 W. Kennedy St. The pastor there is Rev. Lessley Gilmore.

“Minister Stephens plays drums and keyboards at the church,” Gilmore said. “He also preaches about once every other month. He is very involved with bible study and is an obedient servant who is committed to building the Kingdom of God.”

Kevin has recorded five CDs and a live video since he started his group. He is especially proud of his latest CD, which includes a remake of his original song, “Just My Salvation.” He hopes the new CD and video will help him to secure a spot on Bobby Jones’ nationally televised gospel program. He views performing on the show as an opportunity to share his ministry with a wider audience.

Kevin left me with a few words of wisdom. “In whatever you do, give it your all. Stick to it and do it with sincerity and faith in God.”

Have a Friendly Five suggestion? Contact Reggie at
reggie@softspokenband.com or (315) 479-9620