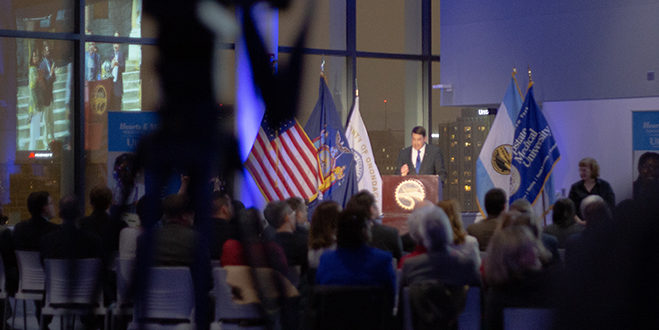 State of the City

Conservative talk-show host Rush Limbaugh uses “My City Was Gone,” a tune by the  rock band The Pretenders, as the opening theme song for his popular radio program.  During the ’90s, Limbaugh added a melody by rock group The Verve, titled “Bitter  Sweet Symphony,” as bumper music while coming back from commercial breaks. Some  radio listeners identify both songs with “El Rushbo,” a self-translation into Spanish of  this political commentator’s first name.

“Bitter Sweet Symphony” was chosen by Syracuse Mayor Ben Walsh to provide musical cover for his appearance on stage in order to deliver the State of the City address at the  State University of New York Upstate Medical University on Jan. 16.

Walsh was introduced to the audience by Rita Paniagua, former executive director of  the Spanish Action League, although not affiliated in any known way with “El Rushbo.”

In November, Paniagua was elected as councilor at-large. The recently inaugurated council member spoke to standing only room of approximately 200 people, whose most significant portion seemed to be made up of government employees, followed in size by another composed of individuals conducting regular business with City Hall.

Paniagua heaped praise on Walsh, describing him as a “visionary who turns crises into opportunities and an intelligent risk-taker with the ability to lead.” Borrowing the title of  a 1966 movie about Sir Thomas More, she introduced the top Syracuse city official as “a man for all seasons.” This film in question depicted the life of this English lawyer who was declared the patron saint of statesmen and politicians by the Vatican.

Walsh took the podium apparently ready to take the challenge of living up to the high expectations placed on him by Paniagua. He delineated the main initiatives undertaken by his administration.

He tackled the reputation of Syracuse as a pedestrian-unfriendly due to the large number of blocks with heavy foot traffic but, nonetheless, having non-existent sidewalks, a neglect that was never remedied by previous city administrations such as those presided by Republican Roy Bernardi (1994-2001), and Democrats Tom Young (1986-1993), Matt Driscoll (2001-2009) and Stephanie Miner (2010-2018).

The current mayor pointed out what is obvious to any city resident walking, riding or driving along the principal local thoroughfares, specially those on the South Side, such  as South Salina Street, South State Street and Midland Avenue, not to mention the side streets.

“There are still too many sidewalks,” he said, “cracked and broken to the point they aren’t usable.” This puts neighbors at risk because they have to walk on the roads, even in the dog days of the summer. In most blocks, roads are in a much better condition than sidewalks in terms of having at least an even surface for walking.

“In addition to having too many sidewalks in dismal condition, the current system of  enforcement puts property owners at risk of large unexpected expenses when their sidewalk gets cited. It creates frustration with city government; hardship on residents; and, sometimes, ill-will between neighbors,” Walsh added. “There are many details to work out on how the city proceeds to take responsibility and pay for sidewalk maintenance and snow removal, but sidewalks, even if you don’t have one in front of your property, are an important public good and an essential part of a healthy city.

The chief city executive also announced the expansion of the leadership team of Syracuse Build, a coalition among the city, Onondaga County and Syracuse University.

Aggie Lane and Pete King, both long-standing activists with the Urban Jobs Task Force, were in attendance.

“I was impressed with the mayor’s talk. I feel he is working hard to include people who are underrepresented in good-paying jobs/careers — like construction, trade and tech. I believe he understands that these jobs/careers are an important piece to combating entrenched poverty.  Part of his plan for economic inclusion is the STEAM (Science Technology Engineering Arts and Mathematics) school and Syracuse Build,” Lane said.

King added, “The mayor is very clever in crafting his discourse and skilled at words. Addressing poverty with development in order to return many residents to the living standards that they historically used to have is a great thing. This is awesome and  cannot be done without growth. Walsh is the poster child of this policy.”

The mayor listed several initiatives related to housing, citing that, since he took office, “there has been a more than 12 percent decline in vacant residential properties in the city” and that the latter has “played a direct role in advancing over 220 new affordable housing units that are  underway.”

“He is also addressing the need for affordable, decent housing in our neighborhoods through his building blitz and through the lead initiative,” said Lane, who also commented on the clearance of snow from the sidewalks. “I see the snow removal program as one that makes our  neighborhoods more livable and safer.”

Walsh updated the public on plans to convert Syracuse into a fully smart city.

“The New York Power Authority named Syracuse New York State’s Flagship Smart City,  putting us out in front of cities across the state and nation,” the mayor said. “Then, Verizon came to us and committed to investing tens of millions of dollars in Syracuse to be one of  the nation’s first citywide installations of superfast 5G wireless technology.  They are already pulling permits and will begin installations later this year,” which also prompted a comment  from Lane.

“The 5G program can help deliver mass rapid transit on some routes and the high speed  internet to the neighborhoods,” she said.

The critical point of diversity didn’t escape Walsh’s attention either.

“Syracuse will be a growing city that embraces diversity and creates opportunity for all,” he said. “Diversity is at the very center of our vision because it has been the source of our strength and power since the great surge of immigrants came to this city at the start of the 20th century.”

In order to accomplish this vision, the mayor said: “While I am proud to have built the most diverse administration in the city’s history, speaking frankly, we still have work to do if we want to truly reflect the diversity of those we serve. So I’ve asked Deputy Mayor (Sharon) Owens to establish and lead the new Office of Inclusion, Diversity, Equity and Accessibility, or IDEA. It is a citywide initiative that will coordinate the actions of staff  currently working in multiple city departments. Their duty will be to ensure that IDEA principles permeate citywide policies, procedures and service delivery.”

King was pleased with the mayor’s stance. “I like his narrative of diversity because diversity becomes a strength for our city,” he said. Then, he suggested expanding the scope of the concept of diversity. “It should be comprehensive, dealing also with the deeper issues stemming from federal government policies that resulted in gentrification, white flight and redlining in the ’30s and ’40s — associated with the Housing Act of 1937 —,  plus the Federal Highway Act of 1956 and urban renewal.”

Lane remained optimistic though. She said, “Overall, I think the mayor is working hard  for everyone in our city but especially for those that are often excluded.”