Kirk Park stands out among recreational parks in Syracuse because of its rich history, and people in the neighborhood have set out to rehabilitate the park from the ground up.

Situated near Onondaga Creek, the park originally was known as Kirkwood Driving Park. It was founded around 1890 and hosted horse and bicycle races at its half-mile racetrack, according to the Syracuse Parks and Recreation website.

Syracuse City Recreational Aide Sheila Jones has witnessed the evolution of the park for the 13 years she’s been working at the Seals Community Center. Jones said the biggest change she’s seen at the park in the past three to five years has been the brand-new football field.

“When they did that field, they started to revitalize this park,” Jones said.

The field now sports a large scoreboard, bleachers with an enclosed viewing booth and a fence surrounding the field. But the community didn’t stop there. 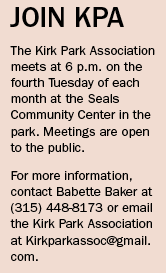 The Kirk Park Association was formed within the past year. Members are people in the neighborhood who want to have a firsthand say in the grassroots process of rejuvenating the park.

Seals Community Center Director Denise Moore is a member of this newly formed group. It partners with the Syracuse City Parks and Recreation Department on many of the park’s renovation projects.

“We make decisions to improve the appearance and quality of the park,” Moore said. “Making it more community friendly and making sure park needs that are not yet met are met.”

This spirit of community was evident in 2010, when a 15-year-old gunman was seen in the park area during a Kirk Park Colts football game. Babette Baker, vice president of the KPA, remembers the positive community reaction after the incident.

“The parents value having an organization (like the Colts),” Baker said. “They really rallied around the kids at that time, the police were wonderful working with the community, and we haven’t had any problems since.”

The association receives much of its money for renovation projects through grants, as well as through a city fund set up to rehabilitate community parks and landmarks, Baker said. She spoke at an association meeting in July, which was focused on how to get the community more involved in park events.

Several major projects have been proposed or are under way at the park, including a $25,000 stone dust walking path that should be completed next summer, and an ongoing planting initiative, which includes community gardens and trees. 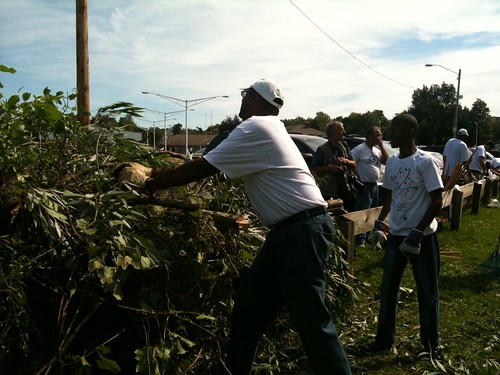 Volunteers stack leftover branches from pruning shrubs at Kirk Park during a cleanup effort as part of the 2011 Acts of Kindness weekend. -- Tara Donaldson, Staff Photo

Vincent Love, president of 100 Black Men, has become part of this planting initiative. The men and boys in the group have done recent gardening around the park. 100 Black Men is a national organization designed to mentor young African-American men in both the academic and social realm, according to the group’s website. The Syracuse chapter includes men and boys from the Kirk Park area.

“We want to help our young men to see that this is their community,” Love said, “and to encourage them to take ownership and be willing to do some footwork to help improve it.”

Love said members of his group have worked at Kirk Park several times in the past year, doing work like clearing brush and planting.

The community has also been proactive in the planning of the park’s renovations, said Parks and Recreation Deputy Commissioner John Walsh.

“It’s a matter of the city and community looking at the park and saying, ‘Yeah, we need this or that,’” Walsh said. “They’re very vocal, and it lets everyone know that they’re there and they’re vibrant.”
Walsh is optimistic about revitalization of the park.

“That area’s got a lot of stereotypes, and they’re not true — it’s a beautiful park,” Walsh said.

“By seeing the neighborhood come out and use this park, people will realize that, ‘Hey, that’s a good place to go and have fun.’”

Kirk Avenue resident Walter Eiland, who is a member of the Kirk Park Association, is confident about the impact the newly renovated park will have on his neighborhood.

“People want decent places for their families to be,” Eiland said. “We are heading in that direction, and we are getting people to change their point of view about some of the areas in this city.”

— Article and photos by Sarah Taddeo, The Stand reporter and journalism student at S.I. Newhouse School of Public Communications