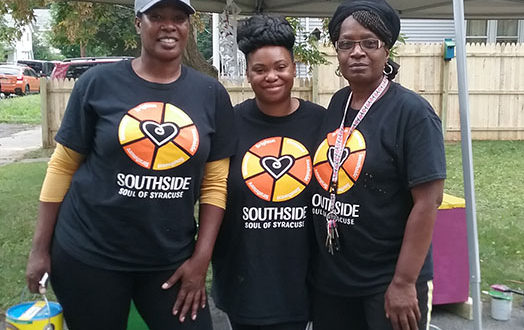 At Tomorrow’s Neighborhoods Today monthly meeting held Monday evening, members of the South Side community gathered virtually to hear proposals for the sector’s Special Project funding. Each sector has $5,000 to use towards community development. Residents submit and vote on proposed ideas that will best serve the community.

Two projects were pitched at the Feb. 7 meeting. The first, presented by Patrona Jones-Rowser, requested $5,000 for multiple community improvement projects at Kirk Park. According to Jones-Rowser, the funding would go towards the installation of five new benches located throughout the park, new planters and improvements for the Kwanzaa Village Community Garden. Jones-Rowser stated that neighborhood residents surrounding the park have made comments that they would like to take walks through the park but have no place to sit.

“There were some communications with South Side residents last year that the pots were not pleasing in comparison to downtown Syracuse planters,” said Jones-Rowser. “We do not have the mayor’s money. On the South Side, we have done what we can on the South Side.”

She also added that her proposal for new benches would be on hold per the request of the city’s parks department, stating the city is considering potential upgrades to park benches throughout city parks.

“The event would be like a civic Saturday, where people would be able to meet with those running for elected offices,” said LaSonde. “We want to have some kind of outing where you get to push out the vote and have candidates meet and greet.”

According to LaSonde, the event would be for children in the community to learn about civic engagement, addressing and informing issues of public concern. The majority of the funding would be allocated towards providing literature from Black and Latinx writers, as well as information on voter registration and education. The remaining funding would go towards a venue to host the event.

Questions arose following LaSonde’s proposal. According to TNT Operations Manager Tina Zagyva, the proposal would only benefit a certain number of community members rather than the general public. For the funding to be approved, how would LaSonde guarantee literature would be available to all community members? Would parents and family members be able to pick them up to give to their children? How would the distribution work?

In the end, LaSonde and board members discussed various options to distribute the literature, such as in gift bags, allowing all attendees to take one.

Following LaSonde’s proposal, members discussed how funding would be distributed. The meeting’s facilitator, South Side resident John Sexton, offered Jones-Rowser $3,300 for her project, citing that each individual project should merit funding. LaSonde’s proposal was awarded $1,700. Following a vote amongst participants, both projects were approved.

The next South Side TNT community meeting will be held virtually at 6 p.m. March 7.