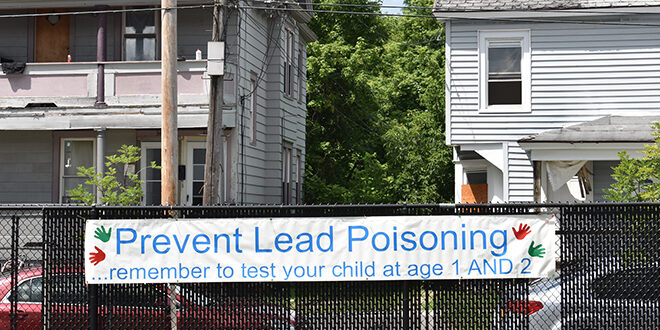 When the Syracuse Common Council passed a new lead ordinance this past summer, they acknowledged the ongoing health crisis facing so many of Syracuse’s families. In a city where roughly 600 children are diagnosed with lead poisoning annually, laws that force accountability from both the government and landlords can be crucial steps on the path towards a lead-free future. But passing legislation is only the beginning, a sentiment shared Thursday during The State University of New York College of Environmental Science and Forestry’s virtual seminar: Syracuse’s Lead Crisis, A Panel Discussion with local Researchers and Organizers.

Ciavarri spoke first, offering listeners a rousing call to action, inviting viewers to champion the cause of childhood lead exposure and do it well.

“Think about the preamble to the constitution, a foundation of our nationhood. We the people of the United States of America. That’s us. In order to form a more perfect union, establish justice, promote the general welfare. Now let’s stop there. Think about that in the context of childhood lead poisoning. Are we reaching for these ideals of our founding document of our constitution?”

Ciavarri insisted on the importance of giving affected families room in this conversation to share their experiences and needs, to seeing them as not only “consumers” but “producers.”

Darlene Medley followed, a fellow community activist and mother of nine with two children with documented elevated blood lead levels. She spoke to the experience of caring for twins facing the effects of lead exposure — the days-long doctor’s appointments, behavioral changes and the abandonment citizens often face when they reach out for help. She picks up her camera and takes the entire Zoom meeting on a tour through her home, detailing the steps she’s taken to provide her children with a healthy house, and the roadblocks she’s encountered.

She spoke with frustration at attempts to remediate lead paint and dust in her rented home — with her landlord and Syracuse’s  Division of Code Enforcement.

The difficulties Medley faces are structural, not individual, and Dr. Sandra Lane’s presentation demonstrated that reality. Lead poisoning is an issue at the intersection of some of Syracuse’s — and America’s — most hot button issues, like healthcare, education and criminal justice. Lane explained sharing a study on lead exposure with the group.

“Children who are exposed to lead under the age of 2 have a greater problem with learning. … they become exhibit greater risk-taking and have lower executive function… [they] are significantly more likely to be arrested as adolescents.”

Dr. Brooks Gump, whose research focuses on low-level lead exposure, offered an additional scientific perspective to how even small amounts of lead can impact the human body significantly. His studies show the effects of lead on the body’s stress response. In his research, he has tested children with varying levels of lead exposure to different stressors and found that “the children that were reacting were the ones that had higher lead levels.” Even in small amounts, the behavioral impacts of lead are quantifiable and adverse.

As the panel drew to a close, the floor was opened for question and answer. Listeners with various interests chimed in, asking questions about topics ranging from scientific research to navigating low-income housing. Near the end, speakers offered advice moving forward. Suggestions ranged from presenting the city with small, actionable steps, enforcing a strict rental registry, to ensuring low-income residents had consistent and reliable points of contact for maintaining their housing. When it comes to Syracuse’s lead crisis, there is still plenty of work to be done.