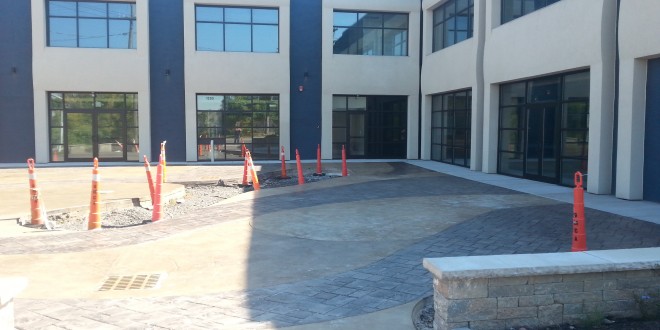 The Clarence Jordan Vision Center, a provider of South Side children’s programs for the past decade, will wrap up interior construction within a year or two, people working on the project say.

“Just making the space updated, people think we’re new. They’re like, ‘What’s that? What goes on in there?”’ Gina Rivers said. “We’ve been here for so, so long.” Rivers, who is community engagement and fund development director for Mercy Works, said the project will soon enter its second phase of construction.

With just two rooms to hold programs for children, the continued construction at the Vision Center will allow the group to reach more children on the South Side. Even now, however, the center has had to put children on a waiting list for its programs.

The Vision Center, which runs various internship and tech programs, is transitioning between phase one and two of construction. The project’s initial projected cost was about $3 million, but has increased to somewhere between to $3.5 million and $4 million, Rivers said. Clarence Jordan, the director of development at Mercy Works, the group that runs The Vision Center and whose name is on the project, said the first phase cost $1 million.

“We are so anticipating the completion of phase two,” said Natividad Cabrera, the program director at Mercy Works. “Not just because of all the new programming we’re going to be offering, but because we then can accept and receive more children into the program.”

Mercy Works runs teen tech classes that teach kids how to use computer programs. If the student comes to each lesson, he or she receives a computer and monitor in exchange. In addition to the computer lab the Vision Center holds right now, Rivers envisions a “Mac lab” with all Apple computers because the Vision Center only currently has a PC lab. The Mac lab is expected to be built in a separate room that is currently a part of the rest of the building’s empty warehouse. 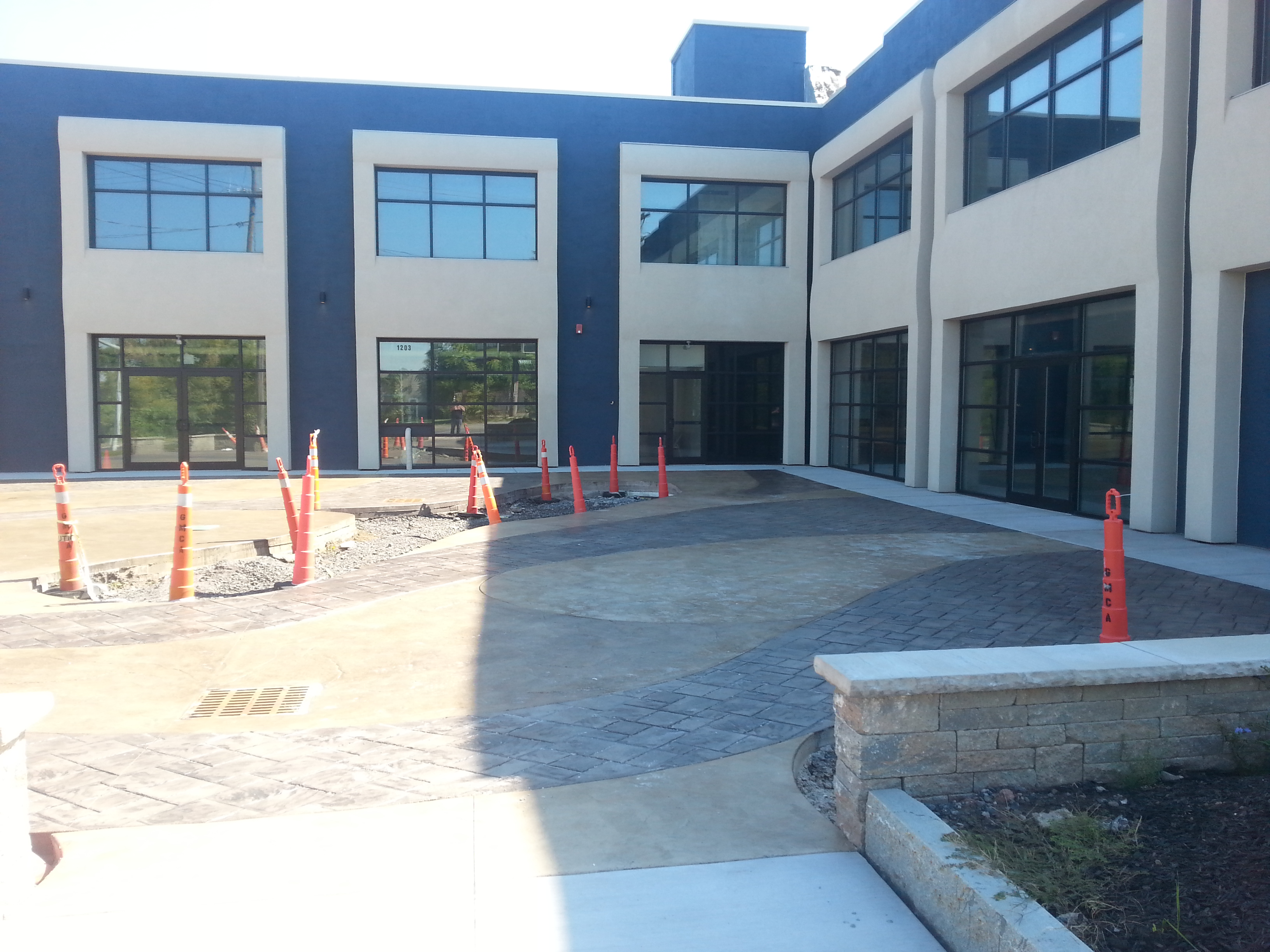 The Vision Center, located at 1221 S. Salina St., is undergoing a nearly $4 million  expansion and will off retail space. The original space opened on May 18, 2006, in an abandoned building that was an eyesore for years. It was turned into a state-of-the-art facility, complete with high speed internet, networked computer learning centers and the opportunity for area kids to enlarge their vision of what their lives could be.

The second floor of the Vision Center is still under construction with a sign hanging in the middle giving a preview of future plans. It will likely house administrative offices, which are currently downstairs in the Vision Center. Rivers anticipates the upstairs will likely have editing suites, classrooms and a 250-seat auditorium.

“We want to finish this phase completely before we move on to the next phase,” Rivers said. “And all of that will be driven by how quickly we raise the money.”

Outside of the warehouse, a courtyard sits on the corner of East Raynor Avenue and South Salina Street and is nearly complete. There are two oval spots filled with rocks set aside for trees. Rivers hopes trees will be planted before winter. Stamped concrete covers the ground.

“Our goal is to finish this and then we’ll enter into the second phase of our construction project,” Rivers said of the courtyard, “which will be to get the retail space in line and then we have an entire second floor.”

The Vision Center should see dividends on its investment in the courtyard soon. On Oct. 30, the Vision Center will host its “Trunk or Treat” for community kids because Cabrera said some of the community streets are not safe for trick-or-treating.

Mercy Works has partnered with sororities from Syracuse University and groups from Le Moyne to decorate cars, which will have candy in their trunks. Cabrera said there will be approximately 90 cars, and Mercy Works hopes to reach more than 600 kids at the event. Last year, the event drew 75 cars and reached 300 kids.

From time to time, Rivers used to see trash littered near the Vision Center. After renovating the windows, which were frosted, and letting the community see the activity going on, she’s seen less littering.

“We want to be a positive influence on future generations,” Cabrera said, “and we know the completion of this entire facility is going to help mold that message.” 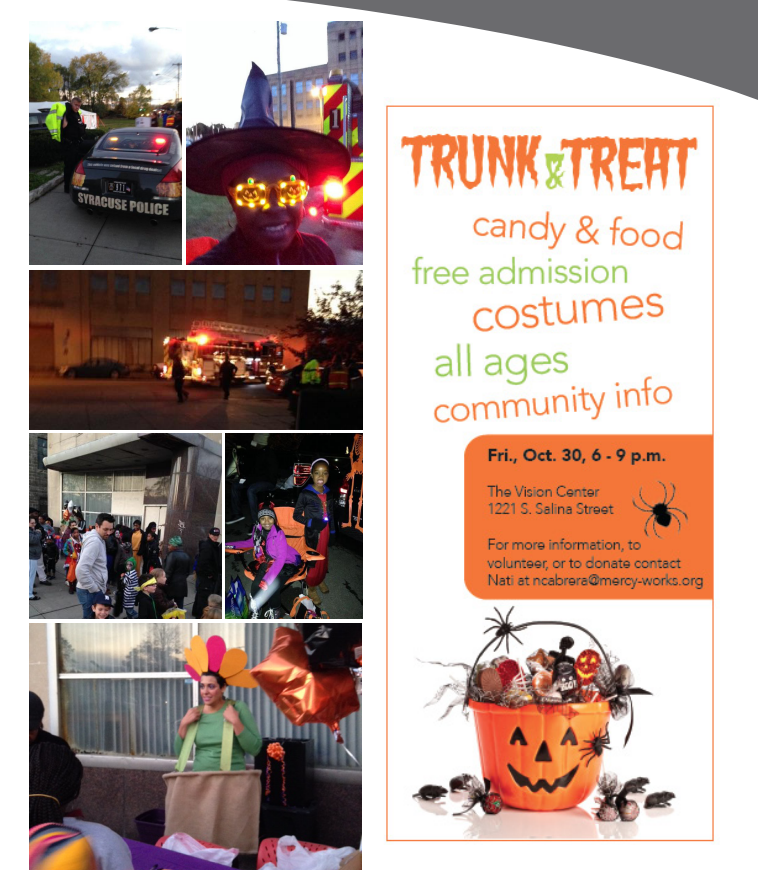