Travon Burke’s grades started slipping during this past spring semester at Syracuse University. Without good enough grades, the Corcoran High School grad wouldn’t be able to play football. And with spring football practices starting, making up for lost ground was looking like a daunting task.

“He told me to call my father and we set up a meeting. Then he took me out of spring ball so I could get my grades up,” Burke said.

Coach Wheatley’s special interest in his success isn’t something Burke expected. That’s because Burke is a walk-on player for Syracuse, which means he isn’t a scholarship athlete and might not receive the same attention from the program as other members of the team. 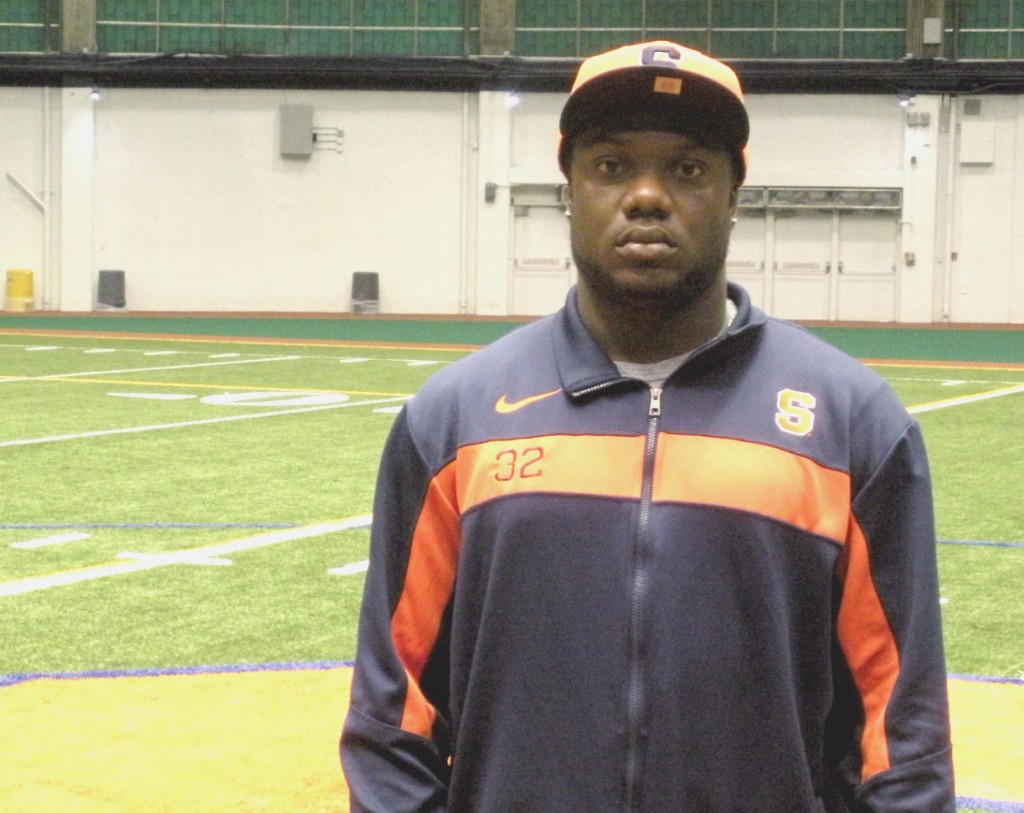 “That really showed me that he cared. Another coach wouldn’t have done that. They would’ve just let me fail,” Burke said.

Thanks in part to Wheatley’s help, Burke is not only back on track with his grades but is also practicing with the team again. The sophomore running back said he thinks he might even get some playing time this season. While things look good right now, Burke’s journey to Syracuse has been anything but easy.

Even though Burke, then a linebacker, finished his senior year as an All-CNY player and was named the Defensive MVP for the Upstate All-Star team in the 2009 Upstate vs. Downstate game, he never received a single scholarship offer.

“I’m not sure at all,” Burke said about why recruiting interest tailed off. “I still don’t know why.”

After spending a year playing football for Milford Academy, it took a little help from his family to get Burke into the world of college football.

Even after Burke joined the team things still weren’t easy. As a freshman, Burke started as a linebacker, but as a young walk-on he said he was used more for tackling practice than anything else.

“I got mad and started running people over,” Burke said. Then the coaches took notice and moved him to running back.

Burke is currently third on the Syracuse depth chart at fullback and is trying to let players at his old high school know what it takes to reach their dreams.

“I tell them every time I see them, ‘You have to just keep working hard,’ ” Burke said. “ ‘Stop hanging out with the wrong crowd. If they’re not trying to do what you’re trying to do, then stay away from them.’ ”

Burke said he also tries to emphasize something his parents taught him.

“School is first. They have to do well in school,” Burke said.

That is a lesson Burke knows he needs to keep in mind as well. After his academic struggles in the spring, Burke isn’t taking anything lightly, particularly because he knows the alternatives.

“I look back at the people I grew up with and see everything they could’ve had, and it’s gone,” Burke said about what motivates him to keep going. “Some people just died, some people are in jail. I go home and I just see the same people doing the same thing.”

“My first plan is to graduate,” Burke said about his future plans. “After that, if football is still here, then I’d love to do it. But if not, I just want to be a successful person that can take care of his family.” With the support he has from his family and coach Wheatley, Burke said accomplishing those goals comes down to one thing.

“You have to work hard from Day One.”