Local activist Phil Prehn got his start as a student protester

As Phil Prehn drove down Interstate 90 from Syracuse to Albany for a concert, he had the radio playing full blast. He was gearing up to see his favorite artist, Bruce Springsteen.

“I’m not saying he’s a god, but maybe a prophet,” Prehn said.

Prehn has been to more concerts than he can remember and is an avid music collector. “He’s like a rock-and-roll guy,” said his wife, Beata Karpinska-Prehn.

Community activism has been running through his veins just as long as the music, a connection he saw and enjoyed in protest songs by Springsteen and others. 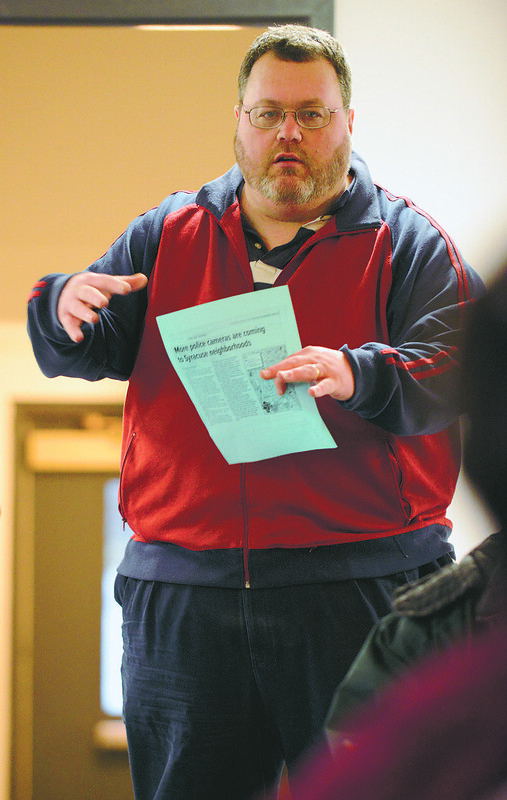 Today, he tackles community issues ranging from a lack of financing for homes to the shortage of grocery stores on both the South Side and Near Westside. He prefers organizing to the limelight, shying away from self- gratifying attention.

“As an organizer my goal is to help people change their lives,” he said.

Prehn has been with the Syracuse United Neighbors organization for 19 years and says the people he has met keep him going, including those on the “rich and wonderful” South Side.

“He can get very animated and enthusiastic about some issues close to his heart,” said Peter Polikarpenko, a board member of SUN. He recalled their many trips to Washington, D.C., for National People’s Action conferences, where Prehn had the opportunity to lobby lawmakers. Polikarpenko said Prehn would get so excited speaking on behalf of the people in Syracuse.

Originally from Fayetteville, Prehn got his start as a community activist at the University of Pennsylvania. He jokes that his focus was on protesting apartheid “and other student activist stuff but my major was political science.”

After graduation, he started out in insurance. But a year and half later, he could tell it wasn’t his calling. “I realized I had to get out of there or I was going to lose my mind.”

Prehn’s community work involves: helping residents get into affordable homes by putting them in contact with local banks and credit unions; providing access to public services through community training sessions; and assisting with educating the community about different programs that will help them rid their neighborhoods of drugs and crime.

Rich Puchalski, executive director of SUN, hired Prehn, and they’ve been working together ever since. Puchalski recalls receiving the application and the certainty of his decision. “I knew I picked the best person after the interview,” Puchalski said. “He’s worked on a number of campaigns and organized residents in the area.”

For Prehn, community organizing wasn’t something passed down through the generations. He and his parents had different views on politics. Just the thought of his parents as activists brings him into a deep laughter. “I didn’t agree on many things with them other than sports and the weather.”

He identifies the reason for his calling: “I think I was destined to do this.”

Prehn’s wife is also a community organizer, as director of advocacy for Arise Child and Family Services. The couple shares a love of dogs.

They have had as many as four dogs at once. All of them were rescue pets. A member of SUN found the recent addition to the family. “She called me and said, ‘Do you want a dog?’ and the magic word ‘Husky,’” Prehn said.

“We were living in an apartment at the time and were forbidden from having pets,” Prehn said. “So we hid the dog from our landlord for two months. We told the dog we bought him a house. That’s how spoiled he is.”

Karpinska-Prehn says the passion her husband has for his dogs is amazing but nowhere near as strong as his desire to serve the community.

His primary focus right now is “trying to reduce the number of vacant houses and helping people become homeowners,” he said, along with “helping people understand how they can change policy to make their neighborhoods better.”

As Prehn looks toward the future, he would like to expand SUN’s reach. “It would be good to be known as a citywide organization.” And he’s going to continue fighting to ensure people have their voices heard.

“He’ll stand on the street corner for hours and tell you how it really is.”