A Deeper Look at Mark Muhammad

Mark Muhammad guards himself as if he were his own personal Queen’s guard. He is hesitant about showing emotion, explaining who he is and expressing his beliefs. But once he is willing to speak, he opens up about who he is like the call to the altar. He has a lot to say, and his words envelop the ears, suggesting the guidance of a wise uncle paired with the elocutionary prod of a minister.

Muhammad, 54, was sworn in to the Syracuse City School District Board of Education in January, named by Mayor Stephanie Miner after another board member resigned to move to Boston. The appointment’s left the comments section of syracuse.com littered with sometimes-racist and hateful statements about him and his religion. The news has gained national notice from Fox News, which said it was troubling that he had not distanced himself from Minister Louis Farrakhan. 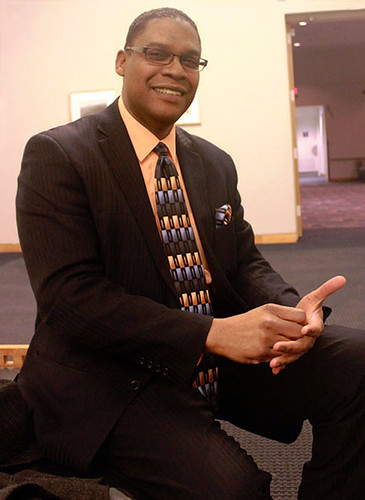 Muhammad is a minister in the Nation of Islam, an Islamic religion that started in the 1930s in Detroit, Michigan, touting the worthiness of black people and encouraging them to improve their own lot. Although the religion’s been credited with improving the communities of black people throughout the years, it’s also been accused of teaching hatred.

What’s most troubling to some supporters and those who know Muhammad is that his faith can be what’s most often discussed, accessorized with a few quotes from him and about him. Yes, he is a minister in the Nation of Islam, which holds study groups regularly on the South Side, meeting near the corner of East Kennedy Street. But he also is a tenured professor in the department of English, Reading and Communication at Onondaga Community College, they point out. And he is one of the longest-standing adjunct seminar professors in Syracuse University’s Renee Crown University Honors Program, where he receives rave reviews from his students, according to Hanna Richardson, an associate deputy director of the program.

Muhammad is a husband, married to his wife Sharon for 26 years. He is a father of a young man and a young woman. He is the son of a devout Christian woman. He is a brother, biologically, through marriage, spirituality, and black acknowledgment.

Muhammad is a well-dressed man, photographed in suits that appear to be only made for him to wear, routinely adorned with a fashionable, crisply placed tie around his neck and matched with neatly waved hair and glasses that give him his scholarly appearance.

He is indeed a scholar, not just of academics, but also of Syracuse.

“I’m out on the corners with gang bangers and drug dealers and prostitutes, and bums. Out on the street with them, glad to be there,” he said about Syracuse.com article comments in which has been called a street preacher. “My experiences, sister, has been, as I like to say, ‘In the streets and the suites. On the hills and in the hood.’”

Although the asphalt of Syracuse’s streets run through his veins, that close relationship hasn’t been enough to stop criticism. But, that doesn’t worry him much.

“My mother prepared me for this [criticism], and I don’t know how she knew. She said, ‘Don’t worry about what people say.’ She said, ‘They talked about Jesus, and he was a good man,’” he said of his mother’s prescient words from years ago. “They killed him for no reason. So, listen, if they talk about me, who am I?”

That’s what some have been wondering, those who have jumped onto the sensational reaction of Muhammad’s new found headline fame.

Muhammad is a true son of the city, born and raised here, a witness to its most difficult times — including, he recalls — school integration. Unlike many people who have lived in one place all their lives, Muhammad has lived most of his life in different parts of the same place, learning how differently they worked then and being mindful of how they operate now through his community service.

Daniel Drashinsky, a Marlboro, New Jersey, native and a sophomore at Syracuse University studying health and physical education, has taken two classes with Muhammad. “If you want to know about the city, you just go to him because he has it all,” Drashinsky says.

Muhammad’s past is similar to the present of many children in Syracuse, where 46.9 percent live in poverty. His beginnings are comparable to many black children across the nation, where one in two black babies are born poor, according to a recent report about ending poverty by the Children’s Defense Fund.

“From what I was told, we were right down the hill in Radisson Court,” Muhammad said of his early years. Just a year after he was born, his parents divorced. He lived with his older brother and church-going mother for most of his life while his father, who remarried and had five children, remained a constant presence.

Another thread was school and public housing.

“I was always a good student. My mother has all my report cards from kindergarten all the way up,” he said, smirking at her collection chronicling his achievement. “School was good for me, important to me.”

Muhammad said his relationship with education began to change when he attended Nichols Elementary School in the fourth grade. He began to do upper-level work in both English and math, achievements that he carried with him to other schools and in higher grades. 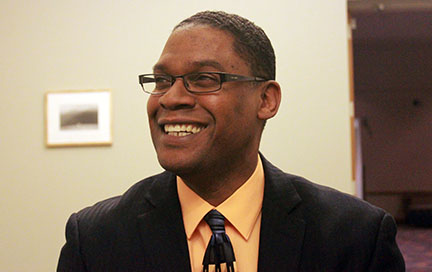 While Muhammad was excelling in school, he was moving around from various parts of the city that included James Geddes Rowhouses, which was referred to as the James Geddes Housing Project at that time, and Eastwood Homes.

He casually calls himself “a kid of the projects.” By the time he graduated from Henninger High School in 1978, he had attended about five different schools and lived in three different city housing projects before his mother bought a house on the South Side near Manley Field House.

Although his mother did not have a lot, she found others ways to give back.

And between both of his parents, both workers at major plants, Muhammad was pushed like a baby duck into the turbulent streets of Syracuse to be a servant.

“My father was very into the community. He was active at work. He was involved in the union. He worked for General Electric and then he worked for Chrysler. So, he was very much into trying to get the union to represent black people,” he said.

His father also got Muhammad and his siblings involved in the YTT (Yesterday, Today, and Tomorrow) Society, where they would clean up the South Side and organize weekend events for young people so they’d have something to do.

Moreover, his mother, a Hopps Memorial CME Church member since she was 13, helped run the church soup kitchen and furniture donation efforts and was involved in other ministries as well.

“She’ll be 83 this year, still at the church, still going to meetings every Sunday, counting the money. Everything. Still getting furniture from other people and giving it away. Delivering it,” Muhammad said, grinning widely at her spunk. “That’s her. Right? That’s what I grew up around. When I went to Cornell, it was just the natural thing to do. So, I did.”

At Cornell University, where he studied industrial and labor relations, Muhammad was active on his campus about race issues. He became a resident director of a dorm that focused on Third World issues. He also served as a chairperson for the dorm’s film and lecture committee, which brought speakers and films to the school.

“It was, one, part of the times. It’s a time where people were really active, black people in particular,” he said of his campus involvement. “But two, I think my father and my mother prepared me to be involved with community issues.”

Being an active social leader fueled Muhammad and consumed his time. So much so that he ended up on academic probation and was asked to leave the school by the end of his first semester in his junior year.

He was out for five years. He started his own home improvement business, worked for Sears, and had a son, Marquith, in 1984.

“I ended up in a life that I didn’t want to live and I had a baby,” he said, now completely relaxed, leaning back in his chair with his hands alternating between clutching his arms and spiking them up in emphasis to drive home a point. “So, I think the combination of those two things made me say, ‘It’s time. I’m ready.’”

After receiving his degree from Cornell, Muhammad landed a job in State College, Pennsylvania, where he worked at a small paper as a human resources director. Part of his job was to renegotiate contracts for the workers at that paper since the now defunct Knight-Ridder had bought it out.

“I didn’t feel comfortable. I’m from a union background, blue collar,” he said. “I had to make a decision: Do I stay and do what I felt was morally wrong, or do I leave and just sacrifice? So, I left. I believed that God would take care of me, and he has.”

He found himself back in the same spot of working odd jobs like selling Kirby vacuum cleaners. In the process of finding himself, he married his longtime girlfriend in 1988 and joined the Nation of Islam in 1989. After three years of studying, he became a minister.

He said studying Louis Farrakhan’s “Self-Improvement: The Basis for Community Development” helped him accept that faith.

“That course of study helped me to understand myself, helped me understand scripture from the Bible and the Holy Quran, and gave me a different perspective about what it meant to be Christian and about what it meant to be a Muslim,” he said, fondly reflecting on his study. “Where I thought they were very different, they were not. It was that understanding that allowed me to then become a part of the Nation of Islam because there wasn’t a contradiction or a conflict.”

Heidi Holtz is the director of research and projects at the Gifford Foundation, a community grant organization that helps improve programs and communities in the area. It is also an organization Muhammad served for 12 years as a board member, until 2012. 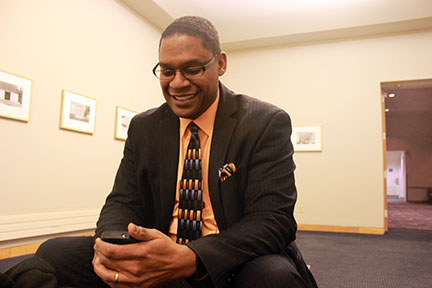 Faith formed Muhammad’s beliefs that the Maxwell School at Syracuse University was — and then was not — the right fit for him when he decided that he wanted to get a master’s degree. He thought Maxwell aligned with his interest in people and his affiliation with the Nation. Yet when he walked into Maxwell to get program information, it didn’t feel right. He recalls a terrible headache, and walking right out. He took it as a sign. As he walked to the quad on the campus, he said it came to him that speech communication was where he needed to be.

By happenstance, when he walked into Sims Hall, the department chair happened to be at the main desk while the secretary had stepped away. From that meeting, he enrolled as a graduate student at Syracuse University and he graduated in 1999 with his M.A. in Speech Communication.

That chance encounter led him to being the adjunct professor he is today at the university, where he teaches courses like “Exploring Your Skin from Without and Within” and “From the Hill to the Hood: To the Community and Beyond,” where he takes students out into the community to meet residents and to learn how to get involved in it.

Drashinsky, the student, says, “It definitely changed the way I see Syracuse because I really never left campus before I went to his class, and it just really opened my eyes to see what more this is besides the university.”

That’s exactly what Muhammad wants to continue to do with his life: make an impact on people.

— Article and photos by Lateshia Beachum, graduate student at the S.I. Newhouse School of Public Communications