From the Street to the Classroom

David Trapps can’t be stopped. His motivation is his time spent in prison. Trapps is 31 years old and the first person in his family to go to college. Though his journey toward becoming a first-generation college student is not a picture-perfect success story, he recalls it as one that has taught him valuable lessons. Born and raised on the South Side of Syracuse, Trapps endured many hardships that could have deterred him. 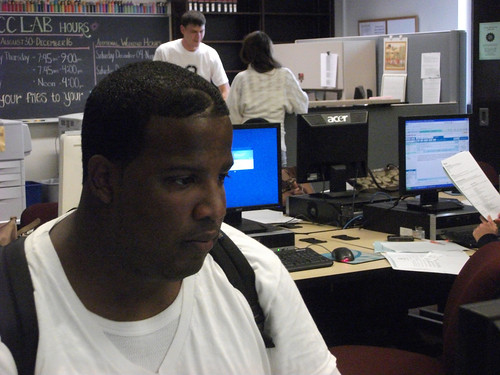 David Trapps at the Coulter Library on the campus of Onondaga Community College. -- Photo by Brandi Kellam

As a youth, Trapps found it hard to listen to his parents’ advice because what they told him to do didn’t match the example they set. His father died when Trapps was 8 years old, and though his stepfather obtained his high school diploma, none of his parents received a college degree.

Trapps almost followed in their footsteps.

As a student at Corcoran High School, Trapps spent time in juvenile detention before eventually dropping out. Soon after, he became associated with a gang that was involved in a murder.

“Somebody was shot and somebody was killed,” Trapps said. He pleaded guilty to possession of a weapon in the second degree, which landed him in prison for almost a decade. And then, his release from prison was short-lived. While looking for work he began selling drugs to make ends meet.

“It was easy for me to re-engage because when I came home people bought a lot of stuff for me … sneakers, clothes all types of stuff … coats … so I felt an obligation to that and that’s how I really got reeled back in.”

Within five months he was back in prison.

“You fool yourself into thinking this is the right course of action but really that’s insanity because I’m doing the same thing, expecting a different result.”

Trapps was released from prison a year later.

The worst part of being in prison was missing the birth of his son. “I missed my first child being born, my son, and that killed me.”

And, it was enough for Trapps to realize that he didn’t want to risk his life or his family by going back to prison. Ever. 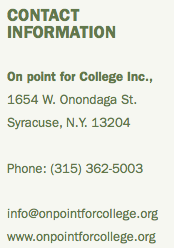 Now 31 years old, Trapps is not a typical first-generation, first-semester college student at Onondaga Community College. Trapps is 10 years older, with a wife and two children. He is a member of the South Side Community Coalition and wants to use what he learned on the streets to help young people make better decisions.

As a student majoring in human services, Trapps overcame the challenges that many first-generation college students face, with the help of the On Point for College program.

According to Samuel Rowser, program director of On Point, many first-generation college students struggle because of the responsibilities they have to help their families. They lack the resources of students whose parents are better off.

“We do have a tendency to think that if we give them enough financial aid and get them into college they should be OK … but the part that people take for granted who have been to college and have supportive families are all those other things that are crucial to a student being successful.”

On Point provides a variety of resources for first-generation and low-income college students, including providing them transportation to and from school, money for books, clothes and even a place to stay when they come home during breaks.

Rowser recalls the drive and determination of Trapps to become a student at OCC. While he was incarcerated, someone stole his identity, used it to go to school, and defaulted on college loans. Trapps had a large amount of paperwork to fill out before he could even begin the college application process.

“He was diligent,” Rowser said. “He did a lot of the groundwork.”

Trapps is thankful for the services that On Point provided. “Two of my friends … tried to go to OCC this semester and couldn’t navigate the paperwork and were frustrated and let the paperwork deter them.” 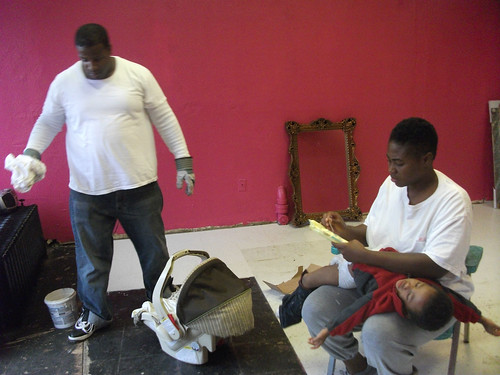 Trapps said being an example to his wife and children motivates him to earn his bachelor’s and eventually his master’s degree. His wife, Antonisha Trapps, has stuck with him.

“You’re kind of waiting on the uncertainty … but I knew he had potential and I knew he was a better person than everybody thought he was,” Antonisha said.

Trapps eventually wants to use the degree from OCC to start an organization that will mentor young people who may be struggling just as he did. “At 14 you think someone that doesn’t have the same experiences as you don’t understand your life.”