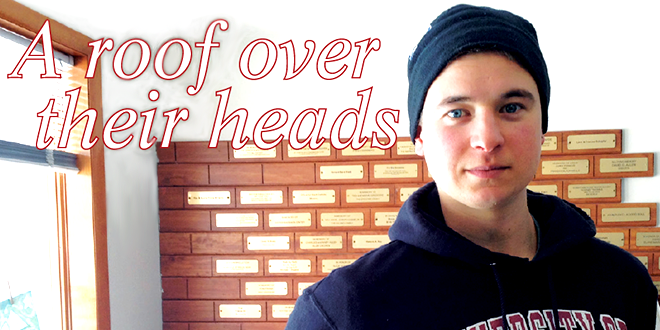 He roams the tiny Brady Faith Center, with a cup of coffee in his hand. He greets each person with a smile and when someone starts a conversation, his eyes focus with a look of genuine interest. 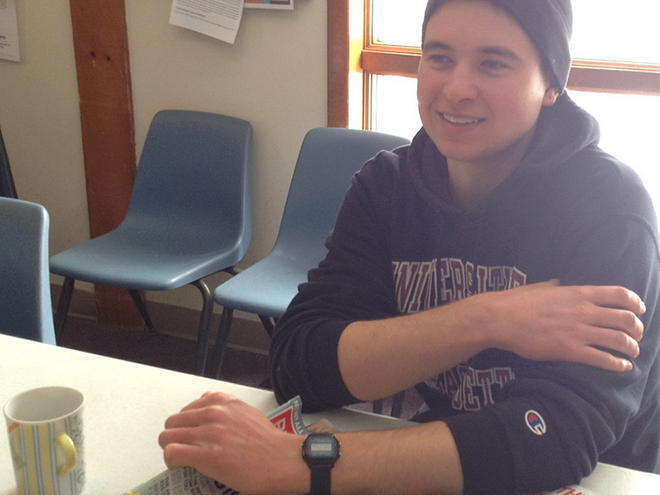 Lunetta is easily the youngest there, wearing a navy blue sweatshirt, jeans and a black winter hat. His eyes are bright blue and light up when he smiles.

The 25-year-old is working a room full of men and women who have faced homelessness at some point.

“I would (say) some of my best friendships are with people who are and have faced homelessness. I think it’s that shift of realizing you have a lot to learn from them,” Lunetta said.

Since graduating from Le Moyne College almost three years ago, Lunetta has devoted hours of community service to the South Side and to the homeless community in Syracuse. His Pedal to Possibilities program, started in 2011, allows people who are facing homelessness a chance to get out, exercise and ride a bike three times a week.

Lunetta is also the muscle behind a morning gathering at the Brady Faith Center, where coffee and food are served for the homeless community three times a week during winter’s brutally cold months.

Now he’s organizing an initiative to build “Tiny Homes” on the South Side, small housing units for those facing homelessness. He formed a nonprofit group called A Tiny Home for Good last November dedicated to the issue.

But when Lunetta was a student at Le Moyne College, he pictured himself as a professional tri-athlete. He spent hours training and went on frequent bike rides.

“(I) very soon realized I got so much more life out (of) sitting down for a cup of coffee with a guy facing homelessness than I did on a bike ride,” Lunetta said. 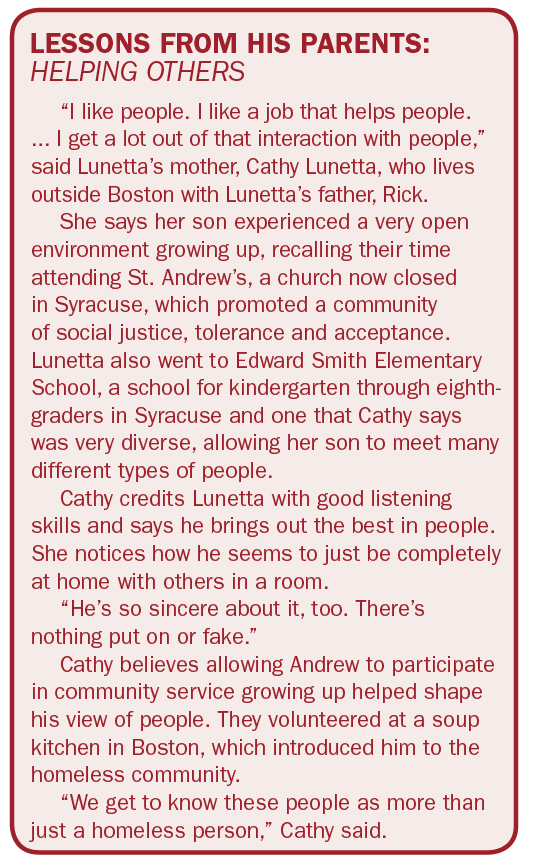 In college, he started working overnight shifts at Oxford Street Inn, a homeless shelter for men in Syracuse. The shelter welcomed men, even if they might be high or drunk. His job: Get the men out around 7 a.m.

He began to see a problem. He wondered what these men would do for the next 9 1/2 hours before they were allowed back in. He could see how some of them would turn to drugs or alcohol.

The men from Oxford Street Inn are not the only people in Syracuse struggling with homelessness.

It’s not a stretch to say that Lunetta came from a family of community service advocates.

His mom, Cathy Lunetta, contemplated becoming a nun and spent a year in Peru before moving back to Syracuse, where she became director of the Dorothy Day House, a women’s shelter. His dad, Rick Lunetta, was a Catholic priest for five years on the North Side of the city. After Rick left the church, he began volunteering at Dorothy Day House, where he met Cathy.

Lunetta remembers volunteering at soup kitchens and participating in Habitat for Humanity as a kid. He lived in Syracuse for seven years before moving to Boston with his family, after his dad started a new job.

Lunetta would meet his now-roommate and one of his closest friends — Dan Khev, 26 — while attending middle school in Boston.

“(Andrew) has a tremendous ability to think of a vision and bring people together around that vision. He really does have a tremendous heart. He notices a lot about people who are on the outside looking in,” Khev said.

After graduating from Le Moyne, Lunetta and his girlfriend at the time biked across the country for more than 60 days, ending in California and raising almost $5,000 for the Brady Faith Center through donations.

The Brady Faith Center, located across the street from the Southwest Community Center, is a familiar place to many on the South Side. It provides services for the community ranging from Sunday Mass to spiritual groups for men and women. Kevin Frank, the center’s executive director, interacts with people daily. 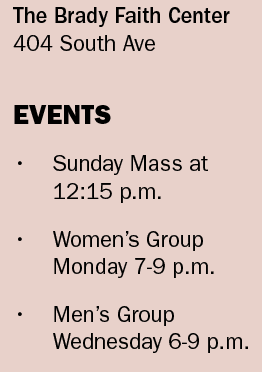 Frank remembers watching Lunetta interact with men at the Oxford Street Inn. He was impressed with how Lunetta knew almost every man by name. Frank said he could tell how much he cared.

“In anything that we do, we can do the right thing for the wrong reasons. Even in ministry or service, you can kind of be in it, but not really understand the core and the heart of why we need to be doing what we’re doing. It’s really about relationships. I think Andrew really understands that,” Frank said.

After Lunetta’s summer trip across the country, he returned to Syracuse in September and rented a house on Midland Avenue. He opened up his house to three other men who were facing homelessness. In 2013, he began attending the Maxwell School of Citizenship and Public Affairs at Syracuse University, hoping to obtain his master’s degree in public administration.

Tony Parton, 47, lived in the Midland Avenue house. He met Lunetta through bike rides with the Pedal to Possibilities program, after seeing a flier for the program at his homeless shelter.

He saw the house as his opportunity to leave the shelter system. Even though he found housing, Parton still struggled to find a job.

“I always wanted to try to get out and find work. It’s not easy,” Parton said. 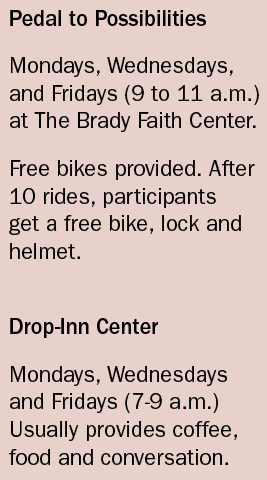 The guys and Lunetta found their bond through biking, and sometimes discussion would turn to a morning ride through Pedals to Possibilities. They even got a kitten, after Parton brought one home.

“We tried to eat dinner together every other night or so, which was really nice. We’d all kind of switch on who would cook and who would clean. Everyone was making steps, looking for jobs, going to school,” Lunetta said.

But halfway through his yearlong graduate program at Maxwell, some things changed. Some guys were still continuing to drink and do drugs in the house, which was against the house policy of no alcohol or drugs.

The thoughts of what the guys were up to whenever he was away began to consume Lunetta. He would stay up all night, listening closely for any type of sign of drinking or drugs. He lost focus at school. He began to feel physical stress from the constant worrying.

He remembered thinking one day, “I just have my hands in way too many things. There are people that are counting on me and I’m not able to give fully myself.”

He eventually had to tell people at three different points during his year at Maxwell to leave the house. It wasn’t easy.

He was scared the first time he had to approach someone — and took a friend with him to deliver the news. 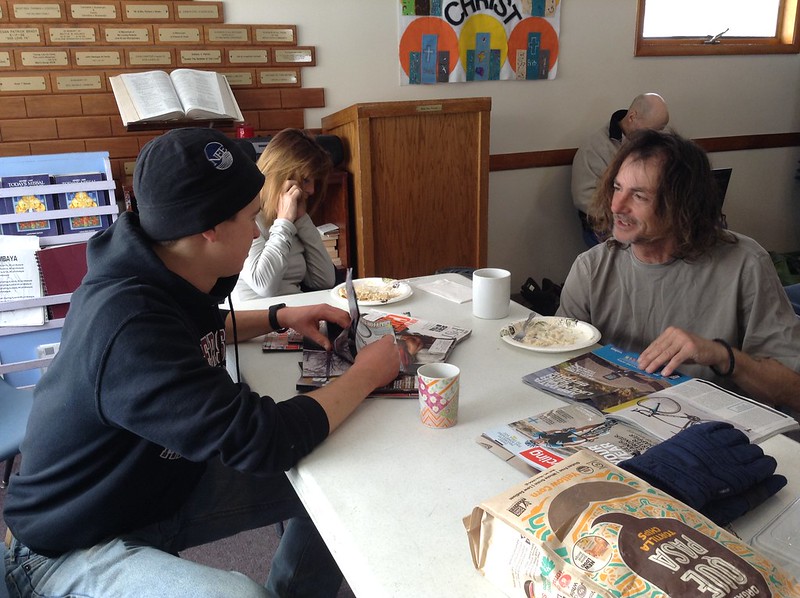 Lunetta talks to a patron at the Brady Faith Center.

“I was more scared of ‘Wow, I failed. I wasn’t able to keep this guy out of the shelter long term. He’s going right back to where I took him from,’” Lunetta said.

Last November, Lunetta launched his non-profit, called A Tiny Home for Good in Syracuse. He hoped to use a vacant lot on the near Westside as the first site. But opposition rose when he proposed it to neighbors living nearby.

“When I say we’re going to rent these three homes to homeless people, bells go off and they think of guys under the bridges, drugs and alcohol,” Lunetta said.

The Greater Syracuse Land Bank, a non-profit group dedicated to redeveloping vacant, abandoned or tax-delinquent properties, held a public meeting last November about the vacant lot on the near Westside. Lunetta hoped this meeting would result in the non-profit group transferring the lot over to A Tiny Home for Good. But 15 other neighbors were also present, openly voicing their opposition.

Ultimately, Greater Syracuse Land Bank representatives said they needed more time for public comment, which Lunetta believes was a nice way of saying he needed to find a new neighborhood for his project.

He believes the negative view of people facing homelessness is what has set the project back.

“I hope to really show that if those facing homelessness have the structure and the safety around them, they can really start to contribute a value and be individuals who society doesn’t brush under the rug or ignore, but who embrace and say these are good people,” Lunetta said.

He continues to move forward with his plan to build a “Tiny Home.”

Lunetta graduated from Maxwell last year. Toward the end of his program, he felt comfortable asking the men to find their own places or help them look. He knew it was time to move on from the Midland Avenue home.

Now, Lunetta mainly focuses his time on “Tiny Homes” but makes money doing framing and painting for a contractor on Fridays, Saturdays and some Sundays. He said his work just barely covers rent and gas.

“He can live on nothing. He doesn’t have a lot of material needs. That seems to keep him pretty happy and grounded,” said Cathy Lunetta about her son’s simple lifestyle.

He currently lives in a house with his close friend from Boston, Khev, and the head of the Pedal to Possibilities Program, Roy Durgin, 26.

Joe Niles, 33, is the oldest of the group living at the house. He faced homelessness after moving back to Syracuse from Florida in 2011 and was unemployed for almost a year before finding work at Gordon Dining Commons at Onondaga Community College. During his unemployed year, he lived at the Rescue Mission in Syracuse and learned about Pedal to Possibilities.

Niles enjoys the community they’ve created in their home, describing Durgin as the resident chef. He said Lunetta is like a brother.

“He has a very upbeat personality. I mean if he is having a bad day, sometimes you might not even know it because he always tries to have a smile on his face,” Niles said.

Parton now works in the kitchen at Le Moyne College. He’s currently living at the YMCA in Syracuse but is looking for a place of his own. He owes a lot to Lunetta, he says.

“I wouldn’t know what to do if I didn’t meet him.”