Two generations of Brelands focus on positive aspects of South Side, such as decent neighbors

From the second story of a yellow house, Richard Breland has watched the South Side change for almost half a century.

When the 15th Ward was demolished, Breland — like many of his displaced neighbors — relocated to the South Side. But he missed the “it takes a village” feeling of the ward, where he lived for more than 30 years.

He moved to the South Side in 1965, helping his aunt run a 76-unit apartment complex on the corner of Willow and Clinton streets. In 1969, he bought the house on South Salina where he still lives. He was the second black person to live on his block. The woman who sold him the house asked that he pay her as much as he could toward the cost, and then she gave him a second mortgage for the rest. 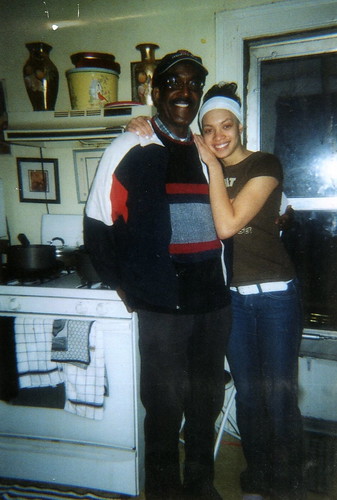 Richard Breland with his nephew’s daughter, Diamond Breland, who lives downstairs in their South Side home. -- Photo Courtesy of Richard Breland

Breland, now 79, does not remember many safety issues when he moved to the South Side. But over time, it has become problematic.

“Safety on the South Side is not to my liking, or anyone’s liking, right now. But time has changed,” he reasoned. “The families have become working families. The mom and dad have to work, whereas before it would be only just dad who would work, and mom would stay home and watch the children.”

Still, he thinks people are doing the best they can, given the stress on their time and limited income. Some people are victims of circumstance, Breland said. The kids do not care to work but want easy money, and drugs are established in the area.

Nowadays, Breland’s downstairs neighbors are his nephew, his nephew’s wife and their daughter, Diamond Breland — a senior at Syracuse University. Diamond said she knew she never wanted to be involved in any of the drugs or crime.

“I kind of feel like my house is just here, and my environment really has nothing to do with me,” she said. “But it’s not like I’m oblivious to what’s going on. It’s pretty obvious. But you just have to disassociate yourself from it, and take it as something that’s not what you want to be part of.”

Growing up in that yellow house, Diamond has also seen the changes: She remembers a law firm in the neighborhood and better-maintained houses. But she said she doesn’t think it’s a “mainstream ghetto.”

“It’s really not as bad as people make it out to be. There’s only like a few people that make the South Side sound like this horrible place, but there are a lot of people in the neighborhood that take care of their houses, clean their yards, are decent neighbors.”

These positive qualities are what the two generations — Richard and Diamond — said they hope for the future of the South Side.

“I can tell that he has a sense of disappointment with how it is now,” Diamond said of Breland. “And I kind of feel like he wants to hold on to this house, because he still has hope that eventually things will revert back to how they were.”

Richard – Growing Up in the 15th Ward by shaynameliker

Diamond – Growing Up in the South Side by shaynameliker

Richard – On Diamond by shaynameliker

Diamond – On Richard by shaynameliker

Richard – On Safety by shaynameliker

Diamond – On Safety by shaynameliker

Richard – Cleaning Up the South Side by shaynameliker

Diamond – How It’s Changed by shaynameliker