Anna Shipe, 56, of Syracuse, will open the doors of her small, donation-based Christian school for its second year this fall, taking in Syracuse’s underprivileged children. Shipe has made it her life’s work to serve children as a way of serving the Lord.

After running a Bible club that began in 2002 and grew to include after-school academic programs, life skills classes and summer specialty camps, Anna decided to open an all-day program to make more of an impact. Anna serves as the administrator at Eagle Wings Academy, located in the Grace Baptist Church at 423 Valley Dr. Each year, Eagle Wings Academy takes in a maximum of 20 students of elementary and secondary school ages.

“Our primary mission is to help children come to know the Lord Jesus as their savior and to know that he has a purpose for their life and then, for the school itself, to equip them to be whatever it is they were created to be,” Anna said.

Anna shares with her husband, David Shipe, a vision of serving the Lord by serving needy children. They have worked with children for years, serving developmentally disabled children and conducting youth groups, Anna said.

“She is driven by a heartfelt desire to see children and adults have a closer walk with the Lord,” said David, 56, who works part-time for the New York State Office of Mental Retardation and Developmental Disabilities. 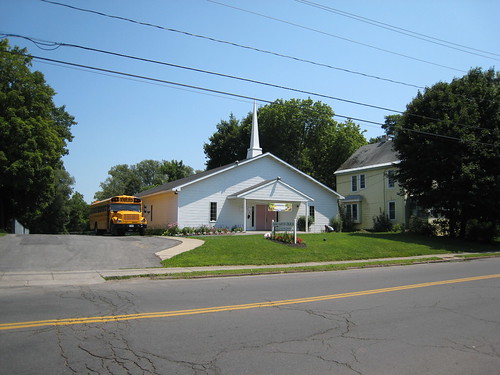 Anna, who grew up in West Babylon on Long Island, has had a relationship with the Lord since elementary school. Her father, who she described as basically an atheist, and her mother, a Catholic, would drop her off at Catholic Sunday school, Anna recalled.

“They used to drop me off to make sure I got my first communion, but it meant nothing to me. It was dry. It was very rote, very legalistic. Nobody talked to me. I used to go, sit in Sunday school,” Anna said. “Nobody asked my name. I used to sit there. When the bell rang, or whatever, I used to leave.”

Her best friend, Cynthia Maser, whom she had known since kindergarten, sparked a religious interest in Anna. It occurred before third and fourth grades when the pair would sing songs learned from her friend’s Presbyterian church’s summer Bible school. Though Maser invited her to attend, Anna had been taught it was a mortal sin for Catholics to enter other churches, so she would ask her friend to sing the songs to her.

“When we were in her pool, I said, ‘Cynthia, sing that song one more time.’ It was John 14:6,” Anna said. “I remember that song the Lord used in my heart to say, ‘It’s not religion. I want a relationship with you. I don’t care whether you sit in a Sunday school class or whether you go to church and kneel. I want to be real to you.’”

Around fourth grade, Anna stopped going to confession and instead, confessed to Jesus. Maser’s parents then invited her parents to go to their church.

“And lo and behold — this was a miracle because my father never stepped foot in a church — they accepted. They went, and then my whole family started going to her church,” Anna said. “That’s when my parents realized it’s not religion: God wants a relationship with us. They became Christians. They opened their lives to the Lord.”

Anna attended Barrington College for a bachelor’s degree in social work and a minor in elementary education. She and her friend Charlene Jehle, 57, now a teacher in Massachusetts, would visit a children’s hospital in Rhode Island during college to do crafts and sing with the children, Jehle said.

“[Working with children is] something the Lord has put in her heart. It’s who she is. She can’t just sit and see something undone without doing it,” Jehle said, explaining what she thinks drives Anna in her work. “It’s painful to sit and see children go through a difficult time.”

After moving to Syracuse in the early ’90s, Anna used to gather medical supplies for 40-foot containers to be sent to hospitals in Ukraine and Africa. Anna went through back surgery during the project, and despite the pain and wearing a back brace, she still finished the project and taught in the Eliakim Christian Academy.

Anna and her husband of 31 years have two grown children: Ruth Ann Williams, a social worker, and Daniel Shipe, a police officer, in Syracuse. Williams became a social worker because of her parents.

“I’ve seen my mother’s ability to impact the world around her and to change people’s lives. It’s motivated me to want to do the same, to make the world a better place to live in,” Williams said.

Anna has worked tirelessly for children and parents in Syracuse, explains Emily Ramsdell, 64, the director of the Child Evangelism Fellowship. Anna and Ramsdell taught children and ran Bible clubs on the West Side. Anna also mentored parents on raising children.

“Someone her age could be putting their feet up and going into retirement, but that’s not what Anna feels she should be doing,” Ramsdell said. “It takes a leader to do what she’s doing at Eagle Wings Academy.”

Anna began a summer park ministry when Williams, 26, worked for Syracuse’s parks and recreation program. Children stayed at the local pools from open to close, so Anna held Bible clubs, arts and crafts and story times throughout the summer for the youth. The program continued beyond summers, leading to an after-school program and then Eagle Wings Academy.

With class sizes around five students, Eagle Wings Academy is able to provide more one-on-one attention to meet the needs of its students. The school provides more opportunity to learn for students who might not be successful in a public school, said advisory board member Will Oscarlece, 52, a technology teacher at Danforth Middle School.

“Eagle Wings Academy can’t replace the public school system, but it can serve kids who otherwise are just going to wind up dropping out eventually,” Oscarlece said.

Oscarlece described Anna as acting like a mother to her students. She holds high behavior and educational standards for the children, he said. The Shipes take the students on trips, invite them to their home for overnight stays and used to bring them over for swimming when they had a pool, he added.

“All the kids have her home phone number. She made a comment they haven’t changed their home phone number in 30 years because the kids know if they call that number they can get a hold of them. They’ll go out and help them in any way they can,” Oscarlece said.

In the 20 years Ramsdell has known her, Anna has always had a big heart for children.

“[Shipe and her husband] really want to see the children have an opportunity to succeed. These are kids that aren’t easy to work with everyday. It is her faith that really carries her through from day to day,” Ramsdell said. “She has a strong faith, and she knows this is what God has called her and her husband to do at this time.”

— Story and photo by Melissa Tinklepaugh, a Syracuse University graduate student in the S.I. Newhouse School of Public Communications