Sitting in on the Sankofa Piece Makers

There are peace makers and there are piece makers, and it’s the latter group that meets weekly at Beauchamp Library. Sankofa Piece Makers have been using the library’s auditorium to create quilts and other hand crafts for about 10 years, helping people piece together the stories that highlight life.

Sankofa is a mythical African bird with a backward-facing head, representing the idea that we need to remember our past as we go into the future. Quilters have been passing on memories for years through their work.

Rose King brought along her first quilt during the Saturday, March 6 meeting, a king-size bedspread, to get help pinning together the three layers before she did the final quilting.
“I didn’t know it would get this big!” King said. 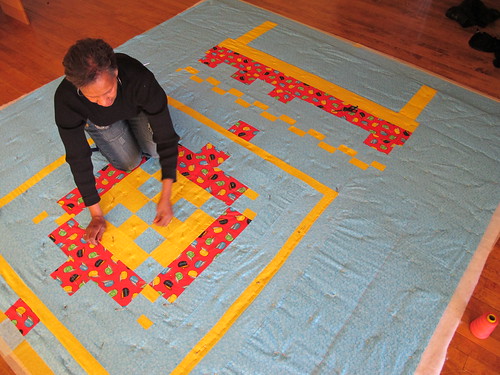 Rose King is on top of her project, she's not afraid to tred or crawl to get to the next area that needs work.

King spread out her work-in-progress on the auditorium stage, covering much of the floor. Though the quilt is for one of her three sons, Brandon Cooks, a popular DJ in the area, who goes by the stage name DJ Brandeezi, she expects them all to compete for the result of her labor.

“It’s going to be all theirs to fight over,” King said.

The fabric, which features baseball caps, represented the many colorful “bills” her son owns, with a blue heart background that shows her love.
While Rose worked on her project, other group members cut out pieces, ironed fabric or sewed together colorful squares. Stations were set up and all the tools set out to share. 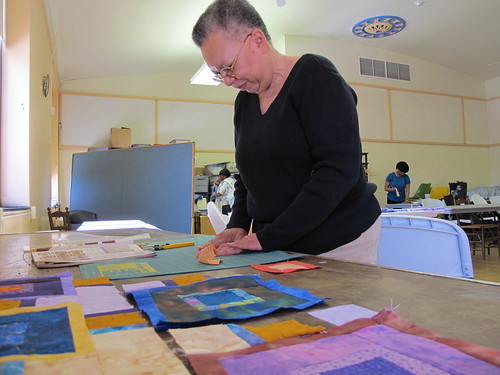 Effie Ratley cuts out squares for her patchwork. She said she would never sell one of her pieces. "I'm not precise enough," Ratley said. "I wouldn't take money from people for what I do."

The Sankofa Piece Makers are open to anyone who would like to join in to learn quilting or to get help on projects they have abandoned in their closet. Though mainly quilters, some members also knit or crochet. They help one another with large-scale projects like King’s, work on their own pieces or discuss anything from that morning’s Lifetime Channel movies to whatever’s happening in their own lives.

Effie Ratley has been with the Sankofa Piece Makers since day one. She heard about a two-week knitting class at the library and waited outside for the librarian to arrive because she didn’t want to be late. That two-week course evolved into a weekly meeting.

Ratley has been coming Saturday mornings ever since.

“We’re not teachers, but we can help you out,” Ratley said.

The Piece Makers meet from 9 a.m. to 1 p.m. every Saturday in the upstairs auditorium at the library, but members said there’s no requirement to stay the whole time.