Looking like an art museum, the office of Jesse Dowdell has a heavy African feel, fully decorated with wooden masks and delicate handcrafts. These record the places across Africa where he has traveled over the years. On the wall, pictures hang — full of happy faces.

Downstairs, children run around and play games. Several people stand in a circle, chatting. Bursts of laughter are heard once in a while. This is the Southwest Community Center, a place where Dowdell has spent more than 25 years. But in April, he will leave here, say goodbye to the people he loves and start a new page of his life.

Dowdell, 68, will retire as chief executive officer of the Southwest Community Center. 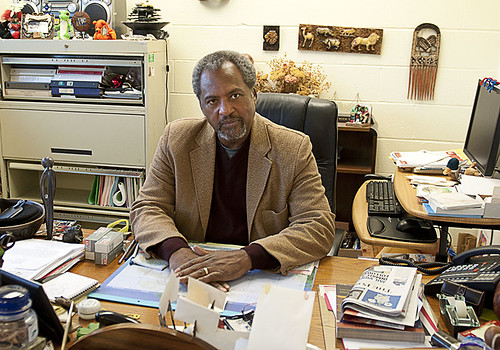 Chief Executive Officer of the Southwest Community Center Jesse Dowdell sits among his possessions as he packs up his office after announcing his retirement. | Maddy Jones, Staff photo

Under his leadership, the center provides educational, social and cultural programs and services, including an afterschool program, HIV/AIDS awareness and family-planning programs. These are geared mainly to the low- and moderate-income residents of the Southwest community. The center serves as a hub in the community, establishing communications and connections among residents.

Dowdell’s achievement at the center is significant. When he took over the job in 1986, the annual budget of the center was only about $28,000, Dowdell said. The area was a transient community, where there was no long-term business investment. People living there were simply moving in and out, Dowdell said.
After years of hard work, the Southwest community has attracted homebuilders and established several affordable housing projects. As the area shifted to a growing community, the revenue grew to around $4 million last year, according to Dowdell.

“When I walked in here years ago, the building here was filthy,” he said. “But, it is not filthy any more. It is clean. It is something we can take pride in.”

Dowdell credits his mother for his success and for his focus on youth education. After his parents split, he left his hometown of Auburn, Ala., with his mother and siblings. At the age of 12, they moved to Syracuse and lived in public housing. That time was quite tough for him, he said. But even in that situation, his mother never gave up on their education.

“When we came here, six people lived on the income my mom made as a cook,” Dowdell said. “We were poor.” But he said his mother was serious about education. “She made sure we did what we were supposed to do — study.”

In 1986, Dowdell quit his job as a teacher in the Syracuse City School District, where he taught auditory education for third grade at Dr. King Elementary School. Dowdell decided to make a difference in the local community where he grew up by devoting his time to the Southwest Community Center.

Dowdell focuses on youth education and tries to make the center as accessible as possible to the community, especially young people. He inspires young people’s interest in education.

Shakya Harrison, 36, met Dowdell when she was a young girl and attended the center’s afterschool program. For more than 16 years, she has worked for Dowdell, currently as a fiscal clerk at the center.

“He is a very nice man and very helpful,” Harrison said. “He tries to do as much as he can for the community.”

Harrison also mentioned that when she first started working at the center, her two children were still quite young. Dowdell showed concern about their education and was supportive, Harrison said, making sure they had access to school.

Having known Dowdell for 25 years, Ed Mitchell, athletic director at the center, thinks of Dowdell as a father figure.

“He means a lot to me as far as helping me raise my kids,” Mitchell said. “I just have a high-school degree, and he has taught me to go back to school, and go play basketball and get a college degree.”

Mitchell wishes Dowdell were not retiring soon because he loves to work and talk with him after work.

“We talk about sports, about life,” Mitchell said. “He worked all his life, and after he retires, he will enjoy himself. We will miss him, but he built this place.”

Jenny Penningston, executive assistant at the center, has worked for Dowdell since 1994.

“I will be sorry to see him go. He did a lot of good things for the community,” Penningston said. “He has passion for educating youth. This is his main thing: pushing education so that our children will be successful.”

Dowdell is a very compassionate person, she said.

“The compassion of him touches me. That, you don’t always get from a boss.”

– By Ruth Li, Graduate student at the S.I. Newhouse School of Public Communications