Seniors are losing their hair over the Ida Benderson Senior Center closing. Literally.

About a dozen seniors lined the sidewalk in front of the downtown center Wednesday, to show support for three women having their heads shaved to protest the center’s closing Oct. 1, after 36 years. 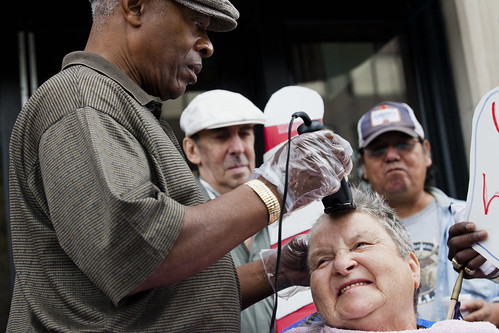 James Shields shaves Sue Hollister's hair off in front of the Ida Benderson Center in protest of the planned closure of the center. Mayor Stephanie Minor wants to move the center and the seniors to the nearby Salvation Army on Oct. 1. -- John C. Liau, The Stand Staff Photo

“They can take my hair, but they can’t take my spirit,” said Sue Hollister, 76, a user of the senior center and the mastermind behind the head-shaving protest. Hollister said she had no problem losing her hair if something good could come of it.

Syracuse Mayor Stephanie Miner mentioned plans to close the center back in August in order to save money in the city’s budget. Miner proposed a city contract to pay the Salvation Army $60,000 a year for two years to take on the seniors from Benderson.

But the seniors don’t want to go. While they are glad for the offer, consensus among the gathered protesters was that they want “their center.” Even if it means relocation, they still want to be at an Ida Benderson Center.

The other two women sitting in the barber’s chair were Mary Carr, 62, and Virginia Dolin, 67. The original plan for the protest was a sit-in at the Mayor’s office, but Carr said the group figured their old bones wouldn’t be able to take sitting that long, so they settled on head shaving. Carr said it was whatever they could do to show how much they believe in this.

“I want us to stay here and grow like my hair is going to grow back,” Carr said. “It feels good to come here. We’re family,” she added.

CNY Central, News Channel 9, YNN and The Post-Standard came out to document the event.

Although only a few days remain before the closing, Sue Hollister is not losing hope. If Wednesday’s, Sept. 28, protest doesn’t change anything, “I’ll come up with something,” she said with a chuckle.