'We Are Trayvon Martin'

Crying out against injustice, voices united, focused on the value of human life. Residents of Syracuse and Central New York gathered in downtown Syracuse Friday, March 30, to honor Trayvon Martin and shed light on his death, injustices committed in this country and in our own backyards. 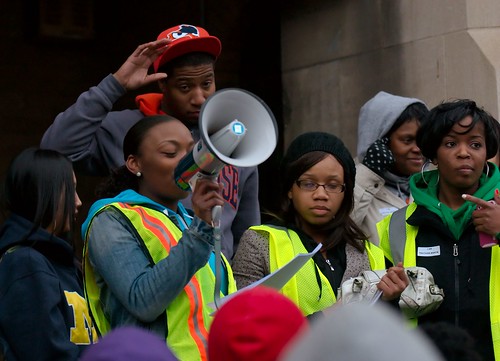 Ciarah Richardson, Yaschia Kinsey and Ashley Miller are the three women behind organizing this march.

The “1,000,000 Hoodie March for Trayvon Martin” brought together locals from all walks of life bringing the attention of the city to the poignant issue of Trayvon Martin’s death.  The march was spearheaded and organized by the local group “Three Women for a Cause.”  This trio who brought the tragedy to the forefront of this community’s minds are Ashley Miller, Ciarah Richardson and Yaschia Kinsey.

“We stand here tonight, united as a community,” exclaimed Richardson, as she spoke at the gathering. Richardson followed with description of the cause pushing the march: “This is about the value of human life.”

The crowd was then rallied by a woman wielding a megaphone, identified as “Tweete,” to chant in unison “We are Trayvon Martin.”

As the march proceeded in relative silence, onlookers took note of the procession moving through the downtown corridor.  The “1,000,000 Hoodie March for Trayvon Martin” culminated in Clinton Square where organizers and honored guests took the microphone to speak out for this cause. 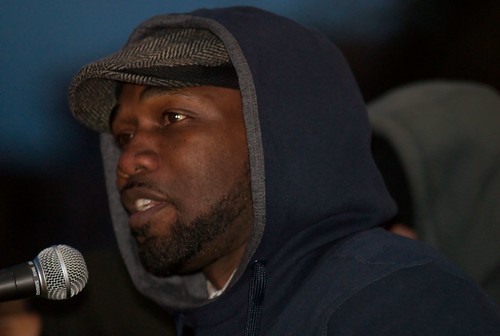 Syracuse City Councilor Khalid Bey asked the march participants if he could get down to speaking plainly as he began to describe injustices occurring close to home. In relaying his view of injustice and maltreatment on a local level he stated: “ I have been stopped on the street myself.”

The lighting of candles and final words marked the end of the gathering, leaving those whom had participated with a sense of purpose.

“Three Women for a Cause” have shown our city that the strength of community can start with just a few dedicated souls.

— Article and photos by Jeremiah Howell, The Stand Community Correspondent