Out of more than 4,500 pieces of artwork submitted in a competition from throughout the Central New York region, Rahmeik Bowen’s creation has been deemed special. Very special.

He was chosen as a Gold Key recipient at the 2013 Scholastic Art Awards for his painting Eye See Me. He’s the only high school student in the Syracuse City School District who won a Gold Key award in fine arts. Yet winning came as a surprise to the 17-year-old senior from Corcoran High School who had not even planned to enter the contest. 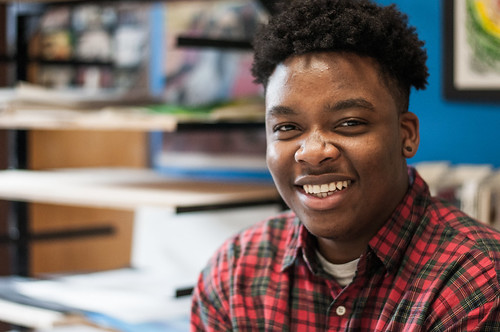 “It was my first time working with acrylic paints, so I was not even expecting to be submitting it,” Bowen said. “Until the deadline came up, and my teacher was, like, ‘Why don’t you submit it?’ ”

The Gold Key is the highest award an artist can receive at the Scholastic Art Awards, followed by the Silver Key and Honorable Mention. Terri Konu, coordinator of the CNY Regional Scholastic Art Awards, said the Central New York region presents about 1,100 awards, including fewer than 300 Gold Keys. “So it’s a pretty prestigious award here,” Konu said.

Bowen’s mother, Wanda Titus, remembers Bowen drawing people when he was 4 years old, and the award came as a surprise to her, too.

“I didn’t know he entered the contest, actually,” Titus said. “He didn’t tell me, until something came in the mail saying that he won the award. I’m like ‘What award?’ It was a big surprise.”

Bowen says his favorite things to draw are portraits. “I like drawing a face and playing around with facial features,” Bowen explained as he flipped through the pages of his portfolio. His favorite portrait is Eye See Me. “It was one of my first self-portraits.” 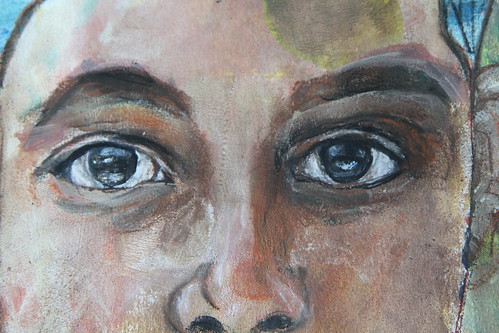 Rahmeik Bowen drew this award-winning self portrait and spent the most time on the eyes. “I noticed that the eyes really stood out.” | Artwork by Rahmeik Bower

The winning self-portrait took Bowen about one month to complete, a little longer than the portraits in his portfolio. Bowen remembers working on the piece continually, while in class, after school and even taking it home. Coming up with the title was very easy, he said.

“After I finished it, I noticed that the eyes really stood out. I worked on that the most. I kept going over it and going over it. So I thought the most important part of the portrait were the eyes,” he said.

Bowen credits Vincent van Gogh for inspiration behind his winning piece. “I’m really inspired by the impressionist movement. Artists like Van Gogh and his self-portraits and the brush strokes he used.”

Growing up on the South Side of Syracuse, Bowen’s first artistic role model was Tom Feelings. Feelings was an artist, illustrator, author, teacher and activist. Through his works, he captured the African-American experience.

“Seeing his work made me want to take it more seriously. I wanted to achieve his look and I thought it was really inspiring,” Bowen said. Bowen and his grandmother, Deborah Banks, both remember the day she took him to meet the illustrator when he was 9 years old. That was Bowen’s very first exposure to the world of art.

Banks is an advocate of the arts. “I just really think it’s important for my grandkids to be exposed to their culture and their history,” she said. “I also took him to the community folk art gallery, just opportunities for him to see, experience and meet particularly African-American artists. I try to do that early on.”

Banks was one person who was not surprised to hear that Bowen had won a Gold Key award. “I’m very proud of him but I’m not surprised of his capabilities. He’s always been encouraged to be himself and not to be afraid to express himself and let his creative juices flow.”

The honor will help Bowen become recognized. Since its founding in 1923, the program has identified the potential of some of the nation’s most brilliant artists, including Andy Warhol, Philip Pearlstein, and Cy Twombly. According to The Scholastic Art Awards, it continues to be the oldest, most prestigious recognition program for creative teens in the United States.

According to Field, in recent years more city schools have started to become more active in submitting pieces. Suburban schools have been proactive for a long time, making them more apt to win. Field believes the role that art plays in education, especially in city schools, is very important. 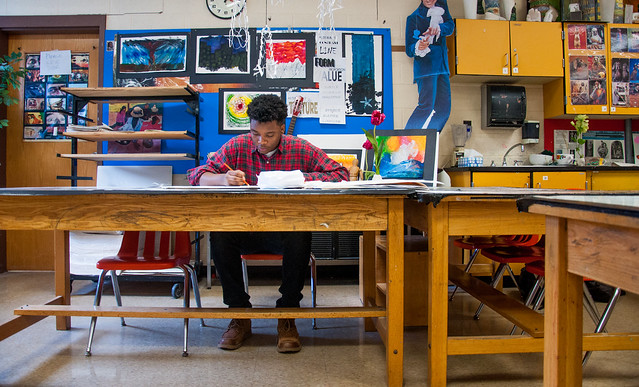 The art class has less than 10 students, which are all required to bring home their current projects to work on over February break. Rahmeik Bowen is a strong artist in all mediums, but his passion lies with photography. He hopes to study photography after he graduates from Corcoran High School. | Alyssa Greenberg, Staff Photo

“I think art teaches kids to think in a different way,” Field said. “If you’re looking at a still life, you have to look at that still life and somehow put it on a blank sheet of paper and make it look three-dimensional and look real. There’s a lot of problem-solving involved, where you may not get that in other subjects.”

Bowen already has applied to five art schools, including Parsons The New School for Design in Manhattan. He hopes to one day have his own art studio in New York City doing photography and design. “I definitely want to do art the rest of my life. I would love to work for magazines like Vogue and Harper’s Bazaar, and do editorials for them because I’m into photography.”

Bowen’s art teacher, Christina Sikorski, recognizes his abilities. “When we get a student like Rahmeik, you know there’s a talent there,” she said. “Rahmeik from his first days told me he just wanted to go to art school.”

Sikorski was a designer in New York City for more than 20 years. She believes that art in a child’s life can be very meaningful. “It’s a great outlet for kids to express themselves and also the sense of achievement,” she said. “The basis of my classes is predominately that. It’s not about the end result. It’s about this journey they took to get there.”

Bowen and other local winners will go on to the National Scholastic Art Awards. There he will get a chance to win money, anywhere from $100 to $500 to be used toward college.

“Art for me is a form of self-expression. It’s my outlet. I’m able to convey all of my emotions, thoughts and ideas through my pieces. It’s my way to creatively vent,” Bowen said.

With his winning artwork currently on display at the Whitney Applied Technology Center at Onondaga Community College, Bowen now gets the opportunity to show the public how he sees himself. 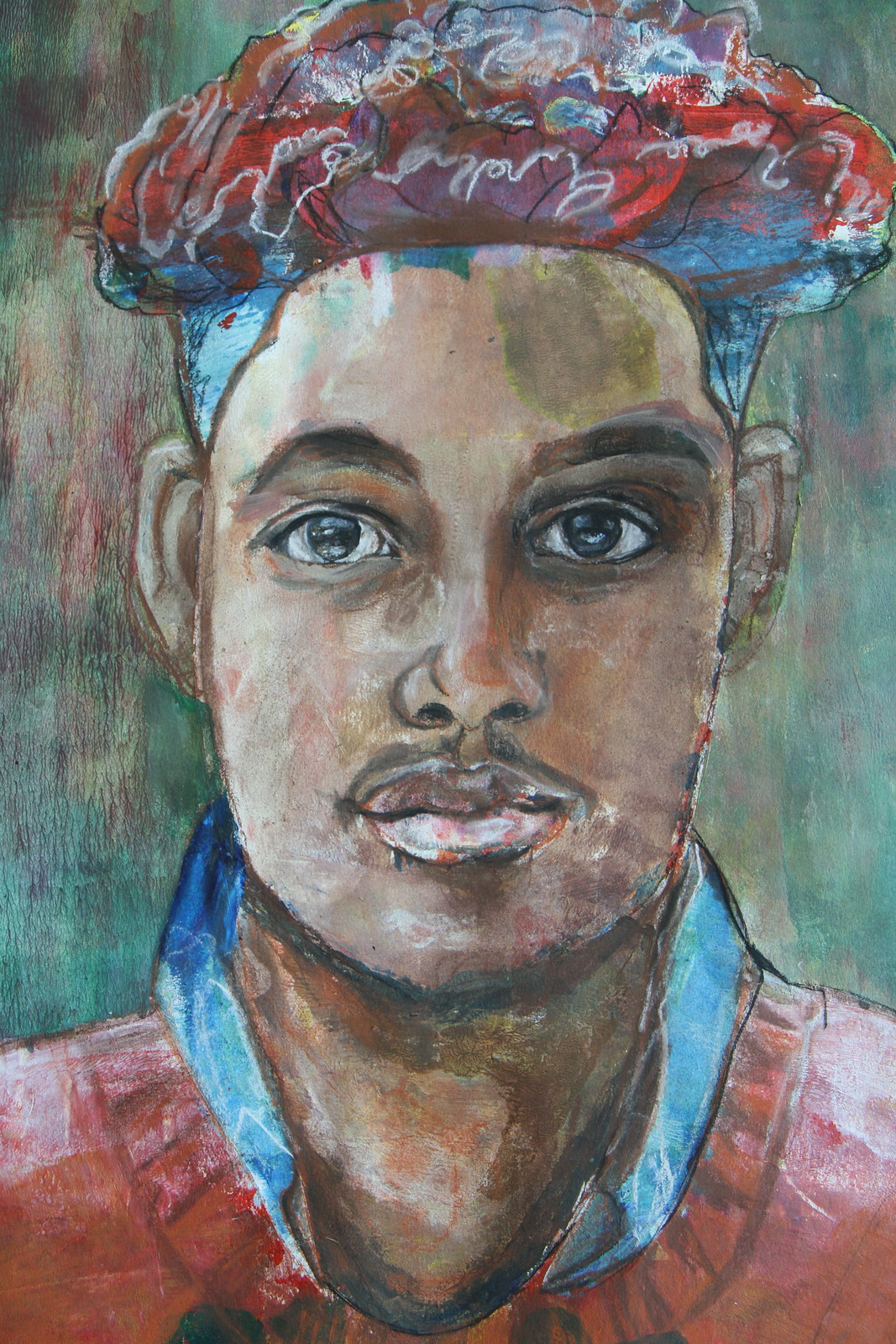