She not only teaches here now, but she also walked these very halls as an elementary student some 40 years ago. Dunn has had a classroom on every floor of the school and just recently settled into her first-floor “home” for this year. 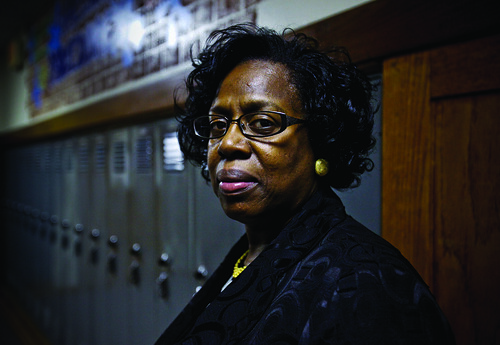 It is a room filled with everything from world maps and a poster of President Barack Obama to word walls and classroom rules. As students work, she patrols, checking to make sure they’re on task and understanding the lesson. Lively and colorful while teaching, Dunn is calm and serene when she works one-on-one with students who need extra help.

Dunn is more than just an eighth-grade social studies and world geography teacher. As a teacher’s assistant and teacher for the past 20 years, she has been many things: a mentor, a role model, an authority figure, and like so many other teachers who go unrecognized — a mother figure.

According to the National Center for Education Statistics, the majority of teachers are women — they make up 84 percent of public school teachers and 87 percent in private schools.

“Some of our students come to school to eat breakfast because they didn’t get it at home,” Dunn said.

Dunn contributes to the community, too, as a church trustee and the congregation’s financial secretary. She has it all in order, but things were not always so great.

Dunn’s mother and father had a tumultuous relationship, and her father was shot and killed when she was 9. But it was when her stepfather joined the family that life became a downward spiral. “He was abusive. Back when I was in school, kids came home for lunch. One day we all went home and my mother was nowhere to be found. There was a broken towel rack on the floor.  When we finally did see her later on that night, her face was swollen and you could tell they had been fighting.”

The constant abuse of her mother finally took its toll. “I left home when I was 16 and went to live with my (grandmother).” Eventually the rest of Dunn’s siblings moved in as well. “Since I was the oldest, I had to basically raise my sisters and brothers.”

Dunn still recalls a former teacher who made a difference for her then.

“I was going through so much when I went to school. I was stubborn and didn’t want to be bothered, but there was one teacher who just wouldn’t leave me alone. My history teacher, Mrs. Geridean, pushed and pushed and wouldn’t let me do whatever I wanted to do.”

Dunn did not go straight to college, though.

Her sister died of leukemia and left three children behind. Having no children of her own, Dunn took on the task of raising her then 2-year-old niece, Shania Golden. Now 24, Shania calls her “Mom.”

Entering the classroom recently, Shania rattles on about the rainy weather. Dunn chuckles and says of Shania, “I created that. She’s as spoiled as can be.”

Shania, asked about the influence Dunn has had in her life, thinks for a moment. “My mother has taught me how to be a woman,” she says.

Currently a teacher’s assistant at Bellevue Elementary School, Shania hopes to soon be a teacher just like her mom. “She’s been a teacher my whole life, and since I was little that’s all I’ve wanted to be. She inspired me.”

Dunn says every year there is that special child she embraces and takes under her wing. “There is a little girl in one of my classes who needs clothes. I’m going to make Shania go through all her old clothes so I can give them to her,” Dunn says. With school having started only six weeks ago, the teacher-student relationship is still being developed, but Dunn knows the day will come when a student will need more than teaching.

Each day she comes to work, Dunn is prepared to be someone’s mother, confidant and protector.

“I don’t ever let anyone hurt my babies. If they fight, I don’t mind jumping in the middle to break it up. If they’re hungry, I have a pantry here at school stocked full of different snacks and treats. If they need clothes or shoes, I provide them.

“I wear several hats. I do home visits — that’s right, I show up at their houses unannounced.  I make phone calls, and I work on the weekend. I’m not always well-received. There was a time when a child was not doing very well in my class. I tried to call his parents several times, and when I couldn’t reach anyone I went to his house. You would think his mother would have been happy that I was concerned about him, but instead, she acted like I was bothering her,” Dunn recalls.
Inclusion teacher Karen Broughton speaks highly of Dunn. “She is a great teacher. She doesn’t let them get away with anything.  She holds them accountable.”

Broughton recalls going over the definition of no-nonsense with a group of students.  She asked, “Which teachers do you know that are no-nonsense teachers?” They all said Dunn. “She’s a no-nonsense teacher, but she’s the kind of teacher who cares as well. Students know she cares about them,” Broughton says.

Seventh-grade Vice Principal Kenneth Baxter fit in praise of Dunn as he patrolled the halls recently. “Pull your pants up boy!” he shouted out to one, and admonished another, “Lay off the girls man. Leave them alone. They’re all complaining about you.”

Dunn worked at a bank for 19 years before she got here. She wasn’t happy, and the seeds that sixth-grade history teacher Ms. Geridean planted when Dunn was in elementary school started to bloom. Dunn was determined to get her bachelor’s degree in history. In 1990, she enrolled in college in Oswego and went to school part time for nine years. She was determined to walk across that stage. In 1999, she did.

“Perseverance is key. I never gave up. Whether you’re a teacher or student, people need to persevere. In order to stay in the race you have to have faith in yourself.”

Reporter Jamese McConico was inspired to write this story because of a real-life experience she had with a teacher who helped her in her youth. To read her account, click here.