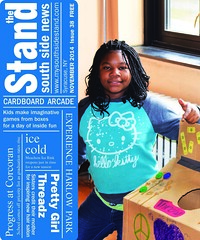 In our November issue, our cover story is on the recent Cardboard Challenge held at Beauchamp Branch Library where youth got to use their imaginations to turn the library into a cardboard arcade.

Another feature article looks at the South Side’s unique Harlow Park founded by Carmen Harlow as an athletic space to honor athletes and youth.

Also featured is coverage of the recently re-opened Meachem Ice Rink, news on how Corcoran has been removed from the priority schools list thanks to its rise in graduation rates and a newly opened salon specializing in African-American hair extensions.

Click the cover to view a full pdf issue. 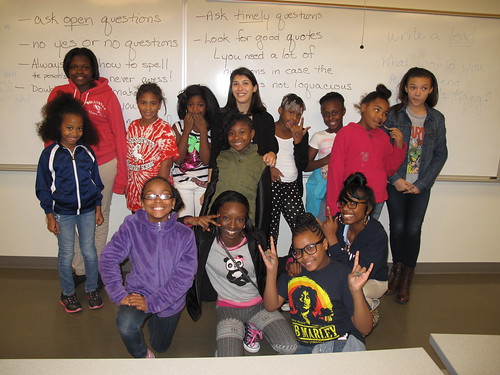 In other news, The Stand celebrated National News Engagement Day Oct. 7 by presenting a journalism lesson for girls in the Literacy Empowers All People program. Girls ages 8 to 14 participate in project LEAP, which is dedicated to improving the reading and writing skills of children who live in poverty.

LEAP leaders use an anti-racist curriculum to assist these young girls with their ability to find information, think about it critically and present their own ideas to others. Last year, the group contributed a column on bullying to The Stand, and they reached out to The Stand’s director to visit one of their sessions so they could learn more about journalism.

On Oct. 7, we discussed how to conduct an interview and worked with the girls in groups to develop questions. They next interviewed Director Ashley Kang and then wrote a lead and nut graph, which is a paragraph in a story that tells readers why the story is important and why they should care about it.

Members of the group that had the most interesting lead each won a Stand T-shirt.

We also recently gave a presentation at the Northeast Region of the Alliance for Community Media annual conference held in Nashua, New Hampshire, during the “Community Journalism and Storytelling” panel with our board member Reggie Seigler, who spoke about the paper’s community partnership. 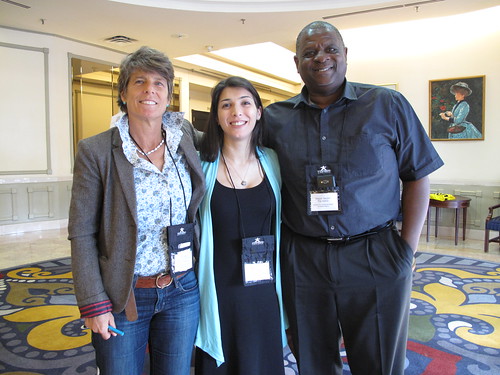 Jane Regan, left, director of Somerville Neighborhood News, stands with Ashley Kang and board member Reggie Seigler of The Stand after a panel session. | Staff Photo

During the panel, “If you Build it, They Will Come: How to Kickstart a Community Newsroom,” Kang was able to share an overview of the history of the South Side Newspaper Project, how it has empowered the community, and what role the university, journalism students and community members play.

The majority of conference attendees were from public access channels in the northeast region. But The Stand was invited to share a new perspective and speak about how its model works along with its partnership with community groups in an effort to encourage PEG (Public, Educational and Governmental) access channels to branch out to publish online news stories and/or pursue partnerships with local media or universities.