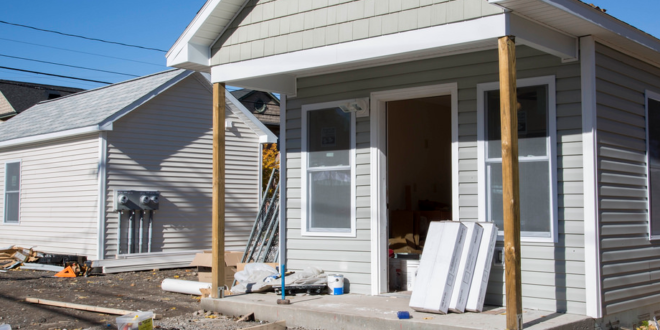 In a lot at 4351 S. Salina St., three new houses stand not quite finished and not quite the size of a regular home, but upright nonetheless. Cars zoom past, their drivers not giving a second look to the work or to the one man on the construction site, tirelessly working in the early-morning sun.

Andrew Lunetta, who works alone on the lot, steps back from his workbench, wipes his brow, and smiles at the tiny house coming together under his workmanship. At 240 square feet, the structure will be a permanent home for a homeless veteran.

Lunetta said he doesn’t want attention; he only wants to continue his quest to provide homeless veterans with access to an affordable, permanent shelter to call home.

“I just thought that with all the vacant properties in the area and the homeless population in this area, that there is a great opportunity for change here,” Lunetta said of the tiny homes. 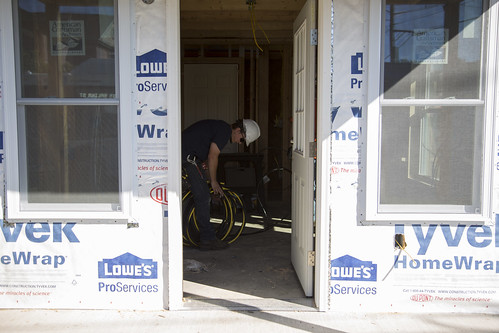 He described the alternative to affordable, permanent housing. “A lot of people will move back into a shelter because the only places they can afford to live are bed-bug infested, hazardous and just not safe,” he said.

Lunetta, 27, founded his nonprofit, A Tiny Home for Good, in November 2014 with the goal of providing the homeless of Syracuse a place to live and call their own. He serves as its executive director. Before he could build anything, Lunetta needed money, land — and the goodwill of neighbors, not always a sure thing.

The fight to obtain and build on the properties wasn’t easy. The Tiny Home team was forced to abandon two other sites after objections from neighbors.

Lunetta said the labels “alcoholic” and “drug addict” are used too often by people to describe the homeless without anyone even trying to understand their story. Residents feared that homeless people moving into their neighborhood would deflate property values and make their neighborhood less safe.

In July, A Tiny Home for Good unveiled its first tiny home, located at 112 Rose Ave. It is one building containing two separate living units, now occupied by two veterans who were homeless. The residents were recommended to Lunetta through his involvement in the community. Each living unit contains a bedroom, kitchen, bathroom and small closet. 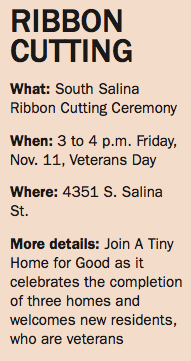 The nonprofit then turned its attention to the South Salina Street property. The national advertising firm Lamar Advertising had donated the lot after deciding that a billboard located on the site was failing to generate revenue from advertising sales.

The ribbon-cutting date for the three tiny homes on South Salina Street will be held Nov. 11, which is Veterans Day. Plans are in the works for more tiny homes to be built.

While Lunetta and volunteers were the sole laborers on the project’s first site, the local construction firm Hayner Hoyt Construction Company donated its services to assist in building the tiny homes on South Salina Street. The company helped coordinate the installation of the plumbing, electricity and more while getting the contractors to assist without charging A Tiny Home for Good. The Hayner Hoyt team has helped expedite the construction process, moving up the unveiling on the home, Lunetta said. 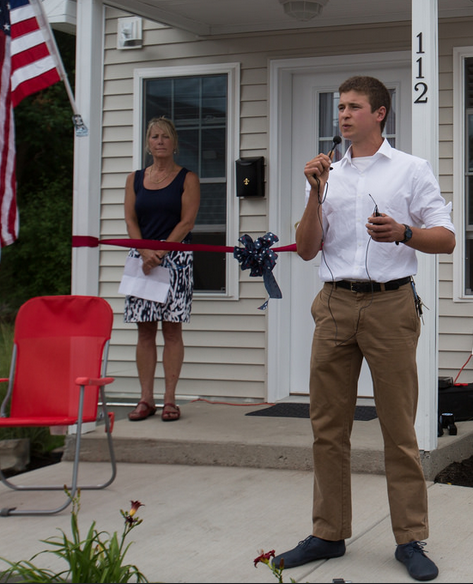 Andrew Lunetta thanks the crowd during the July 22 ribbon-cutting for the first two-unit home built on Rose Avenue. | File photo

“They’re a reflection on the community and who we are as a city,” Lane said. “If we’re not taking care of those two groups, then what are we doing?”

Beth Scanlon, A Tiny Home for Good board member and Le Moyne College campus minister, said Lunetta has a history of selflessness and community service, originating during his childhood and continuing through his time as an undergraduate at Le Moyne.

“Without Andrew, none of this would be a reality,” Scanlon said. “He is constantly working to fix injustices, to help people and to make a difference in this community.

“He’s just an incredible force for good,” she said.

The organization is in the process of acquiring seven more vacant lots on the South Side for the team’s spring 2017 construction, Lunetta said.