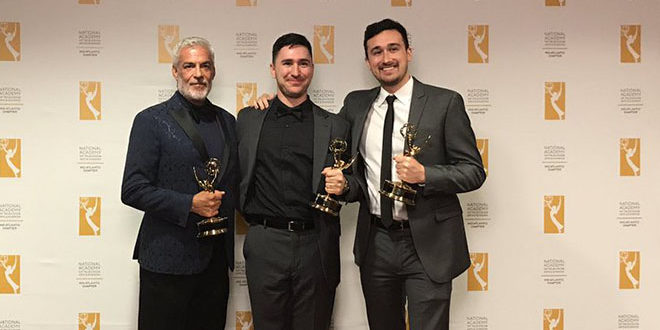 From left to right, Onondaga Historical Association Executive Director Gregg Tripoli with Readily Apparent Media's Field Humphrey and Patrick Newman pose with their Mid-Atlantic Emmy Awards for the short film "Let 'Em Know You're There: The Story of Big Jim and the Triple Double." | Provided Photo

Jim Tucker of the 1955 Syracuse Nationals NBA Championship team held the record for fastest recorded triple-double in a game in NBA history for 63 years. His story was told in Readily Apparent Media’s 2017 film “Let ‘Em Know You’re There: The Story of Big Jim and the Triple Double.” The film won a Regional Emmy Award Saturday evening for the Mid-Atlantic Region in the One-Time Sports Special category.

Most, if not all sports fans know the incredible story of Jackie Robinson’s role in integrating Major League Baseball. But what about Tucker and his teammate Earl Lloyd?

Although Tucker didn’t play a ton of minutes on the Nationals Championship team, he is notable alongside Lloyd as the first Black NBA players to win the NBA title.

After three years in the NBA, Tucker went on to have a successful career as a corporate executive with Pillsbury, which may be an even more amazing feat considering that he grew up during the Jim Crow-era. Tucker is currently battling Alzheimer’s, a fight which is explored in the film and parallels to how his story has been nearly forgotten among basketball history.

The film was directed by Field Humphrey and produced with his team at Readily Apparent Media, including producers Patrick Newman and Ben Altenberg. Over the phone, Humphrey and Newman discussed their excitement to have a hand in memorializing Tucker’s life for his family and for the city of Syracuse.

Humphrey has been friends with Tucker’s grandson for years and decided along with Newman to take on this story as their company’s first project. They felt the need to bring Tucker’s wife, Jan, into the film because of how the couple has learned to cope with Jim’s disease: with old basketball photos and reminders of a life lived that is slowly being forgotten.

“Part of the ethos of Readily Apparent, when we started this, we wanted to make films that really spoke to important topics about life,” Newman said. “So, once we had that talk with Jim and Jan, and they let us know what they were going through, we thought it was important to touch on this human theme that we learned through our time with them.”

The Onondaga Historical Association (OHA) also received production credits. Executive Director of OHA Gregg Tripoli, a credited co-producer on the film, was in Pittsburgh to accept the Emmy award. He noted he will donate the award to the OHA.

“We’re thrilled to be able to shed light on his story and on this remarkable man,” Tripoli said about Tucker. “And what he contributed to the world and how his life is such an inspiration for people.”

Tripoli mentioned the importance of Tucker’s story to integral members of the African-American community here in Syracuse, such as Manny Breland, who also appears in the film.

Breland, the first African-American to receive a basketball scholarship to Syracuse University, noted in the film how Lloyd and Tucker were major role models to him. Although Tucker was mostly a bench player, he served as an inspiration for young men like Breland after signing with the Nationals and recording his triple-double record at Syracuse’s War Memorial Arena.

A triple-double occurs when a player records double digits in three categories in one game. In Tucker’s case, he had 12 points, 10 rebounds and 12 assists in just 17 minutes after coming off the bench against the New York Knicks. Tucker held that record for 63 years until it was broken in 2018 by Denver Nuggets forward Nikola Jokic, who also makes an appearance in the film.

“Sorry for ruining your film,” Jokic jokingly said to the filmmakers during their interview.

“We’re all just so excited that Jim’s getting one more trophy,” Humphrey said.

Watch the film on Amazon here