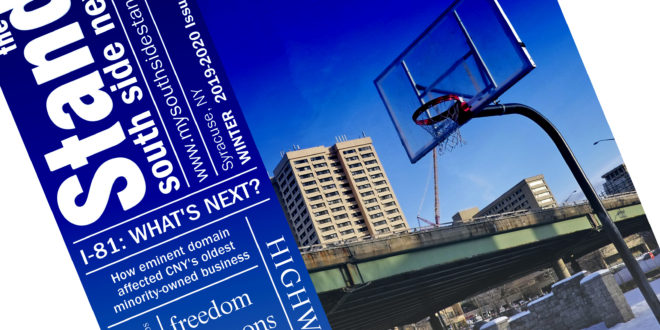 This issue features six pages on I-81, starting with a historical look at eminent domain and its impact on the Garland Brothers Funeral Home. Next, South Side resident Julius Lawrence shares a poem, and members of groups set to be directly affected by the highway’s future contribute three letters. And, The Stand’s columnist Jeff Kramer visits the drive-thru Dunkin’ built next to the 81 viaduct to see what lies ahead for its customers.

Our Winter issue also spotlights Chol Majok, who recently won Syracuse’s 3rd District Common Council seat, in our Fatherhood Q&A. Majok has been married to his wife, Abiei Gai, for 10 years. Both were African refugees who attended Fowler High School. Majok remembers approaching Gai there, telling her she would one day be his wife. Disturbed by his forwardness, she turned him down. Six years later the pair reconnected while Gai studied International Relations and Majok studied Political Science at Syracuse University. The two started dating in 2009 and in 2010 were married. “She is the melody of my heart,” Majok said. When asked what finally won her over, Gai says it was his determination. The couple now has five children.

The Stand is excited to welcome a new photo volunteer Justin Fogarty, who has lived in Syracuse his entire life. His interest in photography began in early childhood. Today he integrates visual documentation into his daily life. Shooting for The Stand, he says, is appealing to him because of our penchant for covering stories in a community that is often represented poorly by other media outlets. “I feel there is no substitute for the closeness and open ears they have towards the communities that they report on,” he said.

We’re also excited to share that the Gifford Foundation awarded us funding through its “What If …” mini-grant to offer community journalism workshops in 2020 and pay for gift cards that we’ll giveaway to residents who participate in our focus group to share feedback on the redesign of The Stand’s website.

Currently, a team of students in Newhouse Professor Adam Peruta’s Designing Interactivity course have dedicated five weeks of the semester to help us re-envision our website to better serve our readers and ensure it is accessible to all. The class’s final project will influence the work to be completed by our new web developer intern, Dana McMullen, who officially started this winter. She’ll work under the guidance of professional volunteers serving as her mentors and then share her final designs in a focus group with readers to collect feedback before launching our new site.

Then in March, The Stand reaches a big milestone: 10 years in print. We’ve been working on a special anniversary issue and planning a community gallery show of some of the best photos captured over the past 10 years. This photo exhibit will also include a collection of images from our 10th Annual Photo Walk.

Prints from our annual Photo Walk are also up for grabs during Dunbar’s fourth annual Live and Silent Winter Art Auction happening TONIGHT. We donated several images from our 2018 gallery show that captured life on a typical summer day in Syracuse’s South Side.

In our next print issue — published in February — we plan to again feature local couples in love. Last February’s cover featured Aundra and Twiggy Billue.

If there is a couple you’d like to see profiled, send your nomination to Ashley Kang at ashley@mysouthsidestand.com or mail a letter with details about the couple, their full names and contact information to The Stand, 2331 S. Salina St., Syracuse NY 13205.

— Ashley Kang
Director of The Stand