Maxwell’s “ascension” begins and a hearty bodied alto voice purrs around Michael Houston’s perfect high note as it resonates throughout the entire Pan-African Village. The range on this duo is unexpected with Anjela humming low lows to big-voiced Adele alto ranges and Michael singing Barry White “Ecstacy” to Maxwell super falsetto’s in nearly equal strength. More than anything, their chemistry and professionalism is “So in Love” with the stage. 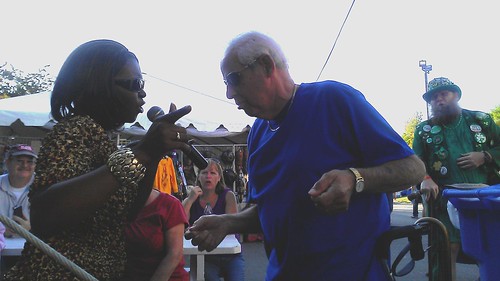 Mike & Anjela are an R&B duet accompanied by The Talented One’s, two keyboardists and a drummer whom all fill out sets like a full-piece band. The Talented One’s are just that, professionally matching leads, twirling drumsticks and pulling away at synthesizers as a horn section or electric piano. Singers Mike and Anj have been performing since J Project (Mike) and as early as Sunday school choir (Anj). They knew The Talented One’s from the Bowen’s family band.

The band describes its music as “true soul with a lot of emotion and passion.” Said plainly, this well-versed R&B duet has a professional sound and delivers “emotions-first” performances.

“I love being entertained. That’s why we come to shows. These guys are good and have no ego; they are just professional,” said the band’s professional audio mixer, Walter Munson.

Take away songs of the night:

Adele “Rolling in the Deep” / Cee-Lo Green “Make Me crazy”

Catch Them: Online at their homepage

Anjela dancing it out with the NYS Fair Leprechaun.