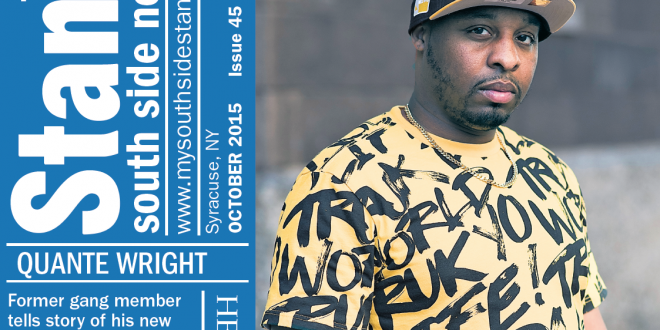 Last month readers of The Stand Newspaper met Quante Wright in our collection of Fatherhood Q&As. Readers may also recognize his name from headlines in The Post-Standard for stories on his success with earning an associate degree in spite of his past. Next several stories followed on how he was fired, violated parole and spent Father’s Day Weekend in jail. 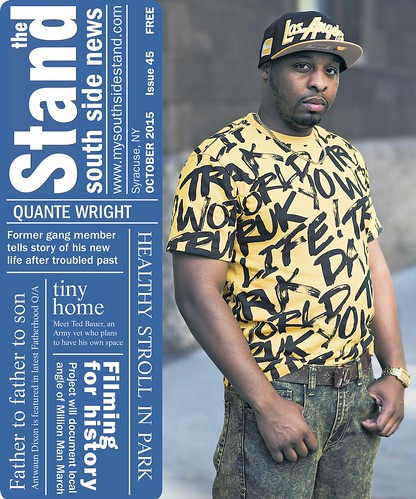 This month, we will hold an interactive Behind the Scenes Talk-Back Oct. 10 where readers can hear directly from Wright and ask questions. In the past, these sessions have provided an inside look at our project as we share the process from interviewing sources through creation of the printed paper.

Wright reached out to The Stand to share his story directly with readers from the community he grew up in.

He hopes by sharing his story he can divert youth from making the same mistakes he did.

The Stand also spoke with another former gang leader, General Davis, who has been engaged with outreach work for more than two decades. He shares his story now with local youth through his program Real Fathers/Real Men.

Also in this print issue, our staff reporter Ashley McBride profiles former community correspondent Brenda Muhammad, who is now a graduate student in the Newhouse School’s Documentary Film & History program. Muhammad is working to complete a film based on local residents’ experiences with the Million Man March, which will celebrate its 20th anniversary this month.

We also profile a future resident of A Tiny Home for Good, which is a project intended to build a collection of small homes for homeless veterans in two locations on the South Side. Reporter Kayli Thompson’s plans to follow this story into November with a timeline of the project and a progress report from the program’s director, Andrew Lunetta.

Lastly, meet this month’s profiled father, Antwaun Dixon, in our Fatherhood Q&A. If you have a father to nominate, send me a bit about him and how we can get in touch with him.

For further information, contact The Stand’s Director Ashley Kang at (315) 882-1054 or Ashley@mysouthsidestand.com. 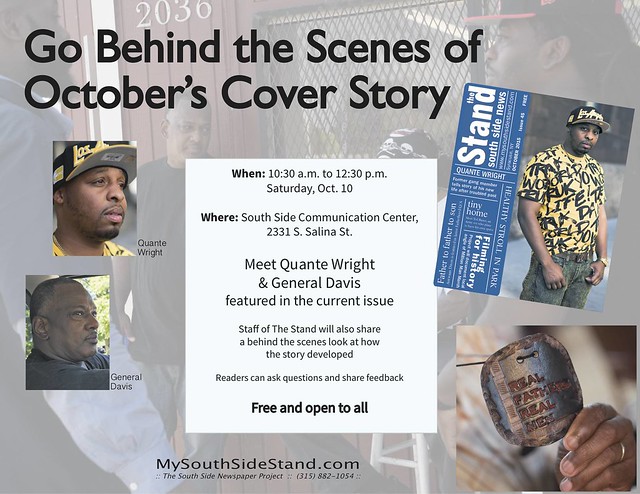